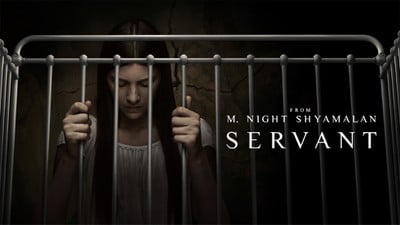 Apple announced the nomination this week via its official "Servant" Twitter account. The TV Choice Awards is held annually, with winners awarded on the basis of a public vote, rather than being chosen by critics. "Servant" will compete with 62 other contenders in the Best Drama Series category in the viewer-selected awards, which celebrate their 25th anniversary this year.

"Servant," a horror thriller produced by M. Night Shyamalan, follows a Philadelphia couple who are in mourning after losing their child. Their baby, Jericho, is replaced by a reborn doll that Dorothy, the mother, thinks is real, and a strange nanny, Leanne, is hired to look after the doll. After Leanne's arrival, bizarre things begin happening to the family.

Believe what you doubt. #Servant has been nominated for Best Drama Series at the #TVChoiceAwards. Exclusively on the Apple TV app with an ‌Apple TV+‌ subscription. https://t.co/i28x1MpgU0 pic.twitter.com/SQiRLHD9DS — Servant (@Servant) May 4, 2021

"Servant" was one of the first series on ‌‌‌Apple TV+‌‌‌, and it has remained popular with ‌‌‌Apple TV+‌‌‌ subscribers, following a strong second season. Apple renewed the show for a third season in December.

The winners will of this year's TV Choice Awards will be announced online in early September.

211
I have found this TV series very frustrating. Too many questions and hardly any payoff. The biggest problems are the unrealistic characterisations, actions and reactions. It's like the creators have never interacted with real people and thought what they would do in such circumstances.

The concept of the show is good as well as the filming of it, but it stretches credibility to nonsensical and the patience of its audience.
Score: 13 Votes (Like | Disagree)

I can't start shows like this - M Night reminds me of JJ Abrams - starts shows with lots of mystery, but never really had an answer to the riddles, which I find to be crazy frustration. JJ's biggest example was Fringe - what a killer show, but more questions than he could answer. I've heard that about Servant so I've avoided it...

Did you finish Fringe? While I didn't love every direction it went, I didn't feel it left a lot unanswered in the end.

Even though I very much enjoy The Servant once I acclimated to each season's groove...a lot will depend on the final explanation for everything. It's one of the shows I look forward to each week tho. Most shows I just wait and binge anymore.
Score: 4 Votes (Like | Disagree)

pushing through to the end of season 2 was a total ball ache. Its just so stupid. I won't be bothering with season 3. NO ONE BEHAVES LIKE THAT IN R£AL LIFE

If that's the metric you rate movies by, then you must be very disappointed with...literally everything.
Score: 3 Votes (Like | Disagree)

Ar40
I love love LOVE this show. I find the writing and acting delicious. People who enjoy realism might be disappointed, this is more a show for those of us who like tense psychological thrillers, along with a dash of good ol' camp.
Score: 3 Votes (Like | Disagree)

Gator5000e
Off topic a bit - but how has For All Mankind not won every TV award available? Great frackin show. I just finished the second season and wish the third season was already available. Fantastic, riveting television.
Score: 2 Votes (Like | Disagree)
Read All Comments

Friday March 19, 2021 10:07 pm PDT by Frank McShan
Apple is partnering with two Los Angeles-based restaurants this weekend to offer free pizza in celebration of the second-season finale of the Apple TV+ show "Servant." The promotion pays homage to "Cheezus Crust," a fictional pizza delivery business in the show. Those in Los Angeles can order the free pizza from either Gjelina or Milo & Olive through Grubhub, with the offer lasting through...
Read Full Article • 45 comments

Wednesday April 21, 2021 8:53 am PDT by Mitchel Broussard
Apple today announced that the critically acclaimed film "CODA" is set to launch on Apple TV+ and in theaters on Friday, August 13. The film tells the story of a seventeen-year-old girl named Ruby (played by Emilia Jones), who is the sole hearing member of a deaf family, nicknamed "CODA," or "child of deaf adults." Ruby's life centers around balancing responsibilities as an interpreter...
Read Full Article • 9 comments

Friday April 16, 2021 11:01 am PDT by Juli Clover
For this week's giveaway, we've teamed up with Activity Awards, a fun company that creates magnets designed to look like the awards that you receive for reaching Apple Watch fitness goals. Priced from $8.99 to $12.99, each magnet is modeled after a different award, with a wide range of options available. There are awards for meeting goals like the seven-day move, exercise, and stand...
Read Full Article • 29 comments