According to the latest podcast analytics, Apple's Podcasts platform recently surpassed 2 million titles, however almost a quarter of those shows have only published one episode, suggesting the numbers are inflated by so-called "once-and-done" podcasts. 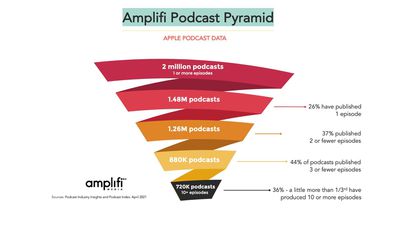 Breaking down the latest statistics provided by Podcast Industry Insights, industry advisor Amplifi Media found that 26% of listed podcasts have published just one episode, suggesting that many content creators immediately went out of business or else never intended to continue creating beyond their opening act.

Adjusting the mark, Amplifi found that 44% of podcasts have published three or fewer episodes, meaning if the arbitrary benchmark of a "real podcast" is set as a series of at least four episodes, then the total number of shows on Apple Podcasts is closer to 880,000.

Looking at podcasts offering ten or more episodes, a little more than a third of all titles have achieved this number (around 36%), which places around 720,000 podcasts at the ten-episode level.

The statistical breakdown suggests that "once-and-done" podcasts clutter up the ‌Apple Podcasts‌ library with what might be considered "dead-end" content. Indeed, according to Podnews.net's James Cridland, 63% of single episode podcasts came via Spotify's Anchor and another 16% came from iHeart's Spreaker, both of which are free-to-use hosting providers that appeal to new podcasters who are still experimenting with the medium.

Amplifi suggests that the way single-act runs inflate the 2 million number is equivalent to including TV shows that produced a pilot but never became a series in a list of all-time TV shows. Despite that assessment, however, Amplifi noted that not all podcasts are suited to multiple episodes:

Not all podcasts are meant to be unending series. You can find plenty of great and evergreen content designed to run for just a handful of episodes. That’s part of the beauty of podcasting, but the one-and-done titles unfairly inflate the overall number of podcasts, and it is revealing that 44% have three or fewer episodes.

Right now, the Podcasts app is free and Apple has no paid podcast content, but rumors have suggested that Apple is working on a paid podcast subscription service that would charge people to listen to podcasts.

With a paid subscription service, Apple could potentially lure high-profile creators with the promise of more money, stealing them away from other platforms like Spotify.

In perhaps a related move, Apple is making a small but notable change to the way listeners can sign up to get updates on new podcast content, with the company changing the word "Subscribe" to "Follow" in the Podcasts app in iOS 14.5.

The word "Subscribe" may have misled Podcasts users into thinking that the podcasts cost money to listen to, in which case the change in language could facilitates the later introduction of a podcasting subscription service and will prevent confusion in the future.

(yes, I know some single episode podcasts can have valid well produced content)

dirkprimbs
Well... statistics is a b*tch.
[LIST=1]
* For starters: I did a crawl myself over the Apple podcast directory and found "only" 1.5m shows. May be my crawler though... of those 680k have 3 or less episodes.
* Turns out of those over 157k just released episodes in 2021 which means they are relatively new. Let's give them some time to establish themselves, shall we? ;-)
* btw, in case you wonder: over 550k of all podcasts I found released episodes in 2021.
* Some shows only release 3 episodes in their feed as teasers and point you to some walled-garden for the full show. The reason is monetization, so I guess having 3 episodes or less online in Apple's directory could also be a sign of a successful show...
* There are publishers releasing audiobooks as "podcasts". Chances are you'll find a 4 hour long file and that's it. Remember: Podcasts do not necessarily require you to run serialized content. For some it is enough to know that their content shows up in clients and directories and it may very well be evergreen content we're talking about.
* While we're at it: podcast concepts vary widely. It makes a difference if you release 5 minute long episodes daily of 4 hour long shows monthly.
* Apple "caps" their directory listings at 300 episodes. If you like to know how many episodes a podcast has you'll need to look into their feed, not at Apple's data.
* Some podcasters cap their feeds as well. That is why over 15k shows seem to have "only" 100 episodes in Apple...

From top of my mind these are only the first 8 reasons why I think this article is mildly interesting but largely useless. Things are usually more complex than they look on first sight ;-)

mrsmith1
As someone who listens to a lot of podcasts, I find this interesting.
Score: 2 Votes (Like | Disagree)

Macintosh IIvx
Podcasts are the new brewery. Every old white man with a beard is starting one.
Score: 2 Votes (Like | Disagree)

jinx.pt
That's one way to look at it...or you can spin it the other way around: 1/3 of published podcasts massively successful, with at least 10 or more published episodes! This shows how easy it is to start publishing continuous content in this platform.

...feel free to add whatever spin you want, really. These statistics don't tell us much, except that it's a really really easy platform to get into, and to keep churning out content!
Score: 1 Votes (Like | Disagree)
Read All Comments