After removing the feature in 2016, much to the disappointment of photographers and videographers, Apple is finally looking to restore the SD card reader on its new 2021 MacBook Pro models. 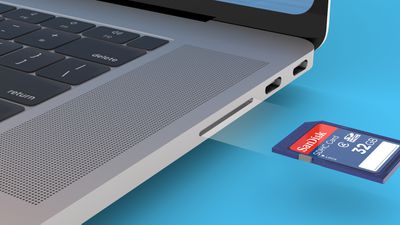 Last month, reputable analyst Ming-Chi Kuo outlined his surprising expectations for the new 14-inch and 16-inch MacBook Pro set to arrive models later this year, including the return of the MagSafe charging connector, the removal of the Touch Bar, a new flat-edged design, and more ports to reduce the need for dongles.

Kuo did not specify which ports may be making a comeback, but Bloomberg's Mark Gurman has now reported that the new MacBook Pro models will feature an SD card reader in particular.

Many photographers and videographers heavily rely on SD cards to transfer files from their cameras to a computer for editing and sharing. With the MacBook Pro redesign in 2016, Apple removed the SD card reader entirely, forcing users to resort to a cumbersome adapter or dock to transfer files. The return of the SD card reader is therefore likely to placate creators and more clearly distinguish the MacBook Pro product line as a series of machines for professionals.

Kuo's report said that "most users may not need to purchase additional dongles" for the next MacBook Pro, so it is possible that an SD card reader will not be the only port is set to return in 2021. As recently as 2015, the MacBook Pro was equipped with an HDMI port and USB-A ports, but it would certainly be surprising to see the latter make a comeback given the tech industry's transition to USB-C.