Apple will begin mass producing the iPhone 12 on a limited scale later this month and on into early October, according to a report today from Nikkei Asian Review. 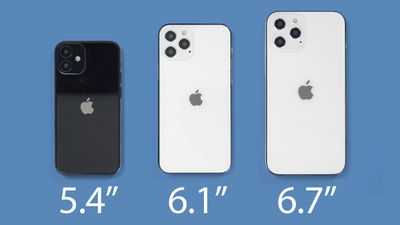 Of the four 5G devices Apple is expected to launch this year, production will reportedly begin with the more affordable 6.1-inch OLED model with dual-lens camera, which accounts for around 40% of Apple's production orders for its ‌iPhone 12‌ lineup, claims Nikkei's sources.

This model is expected to replace the iPhone 11, which is said to have been the single most popular smartphone this year. Apple is also set to launch a smaller 5.4-inch model, a more expensive 6.1-inch model with triple-lens camera, and a premium 6.7-inch model – its largest ‌iPhone‌ yet.

Nikkei claims Apple ordered components for up to 80 million 5G iPhones, but its sources say the actual number produced this year may end up being between 73 million and 74 million, with the rest deferred into early 2021.

That's not being seen as a significant problem in terms of revenue, however, since Apple has been able to reach production orders of as much as 27 million units for new iPads for September-December, which is nearly as much as all iPad models (both new and old) produced in the second half of last year.

The healthy demand for iPads is said to have been a result of the significant increase in remote working and remote learning during the ongoing global health crisis.

In addition, Nikkei claims Apple has already begun mass production of AirTags, the rumored new Tile-like Bluetooth tracking device that's designed to be attached to items like keys and wallets. According to the latest ‌AirTags‌ rumor from Japanese site Mac Otakara, Apple's ‌AirTags‌ will be introduced alongside the ‌iPhone 12‌ and Apple Watch Series 6 at an event set to be held in the latter half of October.

Over the weekend, frequent Leaker Jon Prosser claimed that Apple was targeting a 9:00 a.m. Eastern Time press release today. Prosser had previously said that new ‌iPad‌ and Apple Watch models were planned to launch during the week of September 7.

Prosser has since doubled down on that claim. Bloomberg's Mark Gurman has cast some doubt on the rumor, however, by suggesting that any news today would "more likely" be an announcement about a virtual media event to unveil the next ‌iPhone‌ and Apple Watch.

lotzosushi
Starting??? LATER THIS MONTH???? Don't they begin production like half a year before they're released? There's no way they have enough stock for the whole world if they just start at the end of this month...
Score: 7 Votes (Like | Disagree)

Starting??? LATER THIS MONTH???? Don't they begin production like half a year before they're released? There's no way they have enough stock for the whole world if they just start at the end of this month...

It's okay they saved months not having to produce chargers.
Score: 5 Votes (Like | Disagree)

I heard that the dimensions of new 6.1 pro will be very close to the size of original 5.8.