Apple today announced on its events page that it will be holding a special event on Tuesday, September 15 at 10:00 a.m. at the Steve Jobs Theater on the Apple Park campus in Cupertino, California. 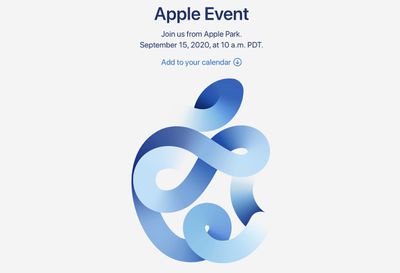 As with WWDC, Apple's fall event appears to be a digital-only gathering with no members of the media invited to attend in person due to the ongoing public health crisis. The format is likely to be similar to WWDC, with Apple providing pre-taped segments for each new product that's expected to be announced.

Apple hasn't released many products in 2020 due to the pandemic, so there's a lot on the horizon. The event will likely focus on the iPhone, and this year, we're expecting four iPhones in three sizes. The iPhone 12, which will be the more affordable ‌iPhone‌ model available, will come in 5.4 and 6.1-inch size options. The 5.4-inch model will be the smallest ‌iPhone‌ that Apple has released in years.

The ‌iPhone 12‌ Pro, the higher-end flagship ‌iPhone‌ models, will come in 6.1 and 6.7-inch size options. The 6.7-inch ‌iPhone‌ will be the largest ‌iPhone‌ that Apple has ever released. All of the iPhones will feature edge to edge displays and Face ID functionality with TrueDepth cameras.

Apple's 2020 ‌iPhone‌ lineup will support 5G and the iPhones will feature a new iPad Pro-style design that does away with the rounded edges that have been used since the ‌iPhone‌ 6 in favor of more squared edges like the iPad Pro or the ‌iPhone‌ 4.

New camera tech is expected, with the high-end iPhones expected to gain LiDAR Scanners similar to the ‌iPad Pro‌, and 120Hz displays are a possibility. All of the new iPhones will use faster A14 chips, and because 5G is expensive, Apple may do away with the power adapter and earbuds that normally come along with an ‌iPhone‌, instead offering these separately.

Apple's iPhones are delayed this year and won't be shipping out to customers in September. Apple has confirmed that the ‌iPhone 12‌ models will launch a few weeks later than usual, suggesting an October debut.

Apple is also working on new iPads, and the event could perhaps see the unveiling of the rumored 11-inch iPad Air that's supposed to feature an all-screen display with Touch ID either built into the power button or under the display. There may also be a new low-cost ‌iPad‌ in the works with a larger form factor.

We're expecting the first Arm-based Macs this year, which could come in the form of a refreshed MacBook Air and a redesigned 23 or 24-inch iMac, but Apple is likely to save those for a later unveiling rather than introducing them with new iPhones.

Other wild card products we could see include the rumored over-ear AirPods Studio headphones, AirTags, a wireless charging mat of some kind, and a smaller, low-cost HomePod. For more on the products that Apple has in the works, make sure to check out our upcoming products guide.

Apple plans to stream the fall ‌iPhone‌ event live on its website and on the Apple TV when it kicks off at 10:00 a.m. Pacific Time. For those unable to watch, MacRumors will be providing full event coverage both on MacRumors.com and through the MacRumorsLive Twitter account.

Update 8:49 a.m.: Apple has also sent out specific invites for members of the press, with the invites carrying the tagline "Time Flies."

Update 9:17 a.m.: Apple has shared a YouTube placeholder video for the event, which will be available live on YouTube, the Events app on ‌Apple TV‌, and the Events website on Apple devices.

SuprUsrStan
look who was wrong :D
Score: 53 Votes (Like | Disagree)

nameste
Apple is the best leaker with%100 accuracy ?
Score: 47 Votes (Like | Disagree)

Prosser was wrong again with this! ?

cmaier
Oh, prosser. Once again Gurman and l0vetodream showing they have actual sources.

Well, time to put all my money in a big shopping bag to give to apple.

Freida
Can we stop reporting from Prosser? That guy is literally and *******
Score: 25 Votes (Like | Disagree)

Ds6778
LMAO Gurman called him out yesterday, Prosser doubled down, and is still somehow holding his head high. Can someone update me on his percentage now that hes 0/2.
Score: 20 Votes (Like | Disagree)
Read All Comments

Monday March 7, 2022 7:41 am PST by Dan Barbera
Apple's long-awaited consumer-level display, reportedly set to be called the "Studio Display," will launch tomorrow during Apple's "Peek Performance" event, according to a new rumor from YouTuber Luke Miani. In a video showcasing renders alleged to be the upcoming "Mac Studio," Miani also shares renders of the "Studio Display." According to the YouTuber who has an unverified track record...
Read Full Article • 276 comments

Thursday August 12, 2021 1:04 pm PDT by Sami Fathi
This year, Apple has already released several new products, including new iPads, the 24-inch iMac, the new Apple TV, and of course, AirTags. Looking ahead to the next few weeks, the list of 2021 Apple products will grow even longer as Apple prepares to reveal the next iPhones, MacBook Pros, and more. There has been an avalanche of rumors about this year's fall season and what Apple has planned ...
Read Full Article • 91 comments