It's almost here! Apple's annual September event is right around the corner, although it will certainly look a little different this year and might not include one of the major products we expect to see each year at this time. 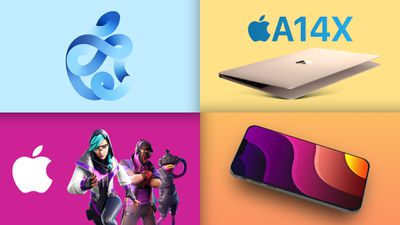 This week also saw new rumors about iPhone 12 launch plans, new developments in the dispute between Apple and Epic Games, and a rumor about the chip destined for the first Apple Silicon-based Mac.

Read on below for all of the details on next Tuesday's event and more!

Apple on Tuesday announced that it will be holding a digital-only media event on Tuesday, September 15, with the event being streamed from the company's Apple Park headquarters.

While September is the traditional time for Apple's iPhone event, reliable sources are indicating that we will NOT be seeing the introduction of the iPhone 12 lineup at next week's event. Instead, the event with a tagline of "Time Flies" will be largely focused on new Apple Watch and iPad models. Check out our complete look at what we expect to see at the event for more details.

Apple's event page includes an animated augmented reality logo that you can place in the real world, while just ahead of the event announcement Twitter debuted a custom hashflag Apple icon for those using the #appleevent hashtag.

If the iPhone 12 isn't coming at next week's event, when can we expect it? Apple has said the new iPhones will be launching "a few weeks later" than usual, so another event in early October seems likely.

Regardless of the exact timing, carriers are starting to ramp up preparations for the launch, and Apple is said to be starting mass production on the new models later this month.

One of the key features of the iPhone 12 lineup will be 5G support, but not all models will have the same types of 5G support, so check out our guide to mmWave vs. Sub-6GHz 5G to learn about the differences.

Yes, the war between Apple and Epic Games continues to rage, with Epic last weekend asking a court to force Apple to reinstate Epic's developer account and put Fortnite back on the App Store. Epic says it is "likely to suffer irreparable harm" if Fortnite is kept off of the App Store.

For its part, Apple says that the situation is of Epic's own making, and Apple has filed a countersuit for breach of contract damages. Apple says Epic engaged in "willful, brazen, and unlawful conduct" in what amounts to "nothing more than a basic disagreement over money."

That obviously didn't sit well with Epic founder and CEO Tim Sweeney, who shared a Twitter thread arguing that Apple has "lost sight of the tech industry's founding principles" and that the rights of users and creators are the foundation of Epic's actions and lawsuit.

Apple has said that its first Macs using Apple-designed processors will launch before the end of the year, and a new report claims that an A14X chip destined for both the first Apple Silicon Mac and an updated iPad Pro will be entering production in the fourth quarter of this year.

A previous rumor claimed that the first Apple Silicon Mac will be a revived 12-inch MacBook sporting battery life of 15-20 hours and based on TSMC's latest 5-nanometer chip process for maximum efficiency.

Apple is famous for disguising its prototype devices to make it more difficult to identify them, and some new photos reveal the lengths Apple went to in hiding the Apple Watch before its debut.

The photos reveal the Apple Watch hidden inside a protective case that resembles an iPod nano, which is fitting considering that in the days before the Apple Watch, some iPod nano owners took to wearing their devices as wristwatches using third-party cases.

melgross
How many tines must it be said that no chip for iOS devices will end up in a shipping product? the developer kit has the A12z, but that is not a “shipping product”. It has to be returned after actual products come out.

apple stated quite clearly that Macs will have a line of specially designed chips just for them, and that Apple will NOT use iPhone ir iPad chips.

so why do some writers still say that an A14x will be in a new Macbook? It won’t be.
Score: 6 Votes (Like | Disagree)

The title "Time flies" does suggest a drastic change in Apple lineup, now the only thing that has changed is Apple adopting arm architecture. I think that Apple shall be introducing a new arm based Apple laptop/ desktop (like MacBook or Mac mini or 20" iMac)

My sources aren't changing on this.
Score: 4 Votes (Like | Disagree)

so why do some writers still say that an A14x will be in a new Macbook? It won’t be.

I have been wondering this myself..

They will obviously be at a different power rating just to start. To use the “same” chip or even name would be a terrible marketing move. Apple is smarter than that.

I think the closest name to A14X would be A14Xi. But I still think it will have a different name entirely.
Score: 3 Votes (Like | Disagree)

Apple_Robert
Let‘s get ready to rumble...

Bring on the Tuesday event.

In before the MacRumors BOT. :P
Score: 2 Votes (Like | Disagree)

I'm in the camp that believes Apple's first AS Mac out of the gate needs to be something more than the lowest power MacBook. No matter the battery life. If you give people good cause to laugh at you, it's hard to make them stop. I had a Newton 2100 and its handwriting recognition was actually excellent. But good luck telling that to people who'd read Doonsbury.

The A12Z is already pretty competitive with the H class of CPU used in the 16" MacBook Pro by at least some measures. If apple is able to bring that sort of performance to a computer in this ultra thin and light class I don't think there's going to be a lot of room for ridicule there. Now, if they really do bring back the butterfly keyboard with it OTOH...

I think in the 12" MacBook the economy of scale of using the vanilla iPad chip is potentially worth it even if there is a degree of performance trade off. If nothing else, it will finally be a fully realised fanless MacBook after the Intel incarnation left a lot to be desired.
Score: 1 Votes (Like | Disagree)

God, please let it be the Apple Jetpack.

They've been testing it around LAX. The fact it is so far from Cupertino should have been your first clue it's obviously Apple! No one would suspect them!