Speculation Over an Apple Search Engine Resurfaces, But Apple Likely Remains Focused on Siri and Spotlight

Multiple developers have seen increased activity from Apple's web crawler Applebot in their website logs recently, reigniting speculation that Apple could be planning to launch a full-fledged search engine eventually. However, it's more likely that any possible uptick relates to Apple's efforts to improve Siri and Spotlight search results. 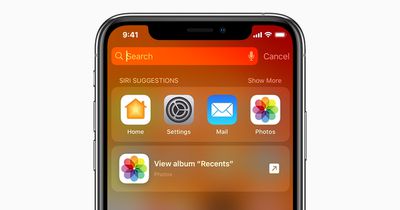 Jon Henshaw, founder of digital marketing insights firm Coywolf, kicked off the speculation with a blog post this week in which he said that Applebot had begun regularly crawling his websites on a daily basis, something he had not noticed previously. And on Twitter, Stack Overflow engineer Nick Craver and digital marketing consultant Michael James Field also noted spikes in Applebot crawling on websites they oversee in recent days.

This is very interesting. We're also seeing massive spike in crawls from applebot too on our sites (From 0 to 6k-7k over last few days) https://t.co/nUMAMty7Du — Michael James Field (Mikuss) (@Mikuss) August 27, 2020

Like other web crawlers, Applebot scans the web to help determine how search results should be ranked based on several factors, including user engagement, the relevancy and matching of search terms to a page's topics and content, the number of links that a page has received from other websites, and a page's design characteristics.

As noted by Henshaw, Apple updated its Applebot support document in July with new details:

• Added how to verify traffic from Applebot
• Expanded details on the Applebot user agent, including differences between its desktop and mobile version
• Expanded robots.txt rules
• Added a section stating that they don't just crawl HTML, but also render pages similar to Google
• Added a section on search rankings and the factors that affect how it ranks web search results

Given that Apple promotes itself as a privacy-focused company without an ad- or data-driven business model like Google or Facebook, it is uncertain if it would ever want to go down the avenue of launching a full-fledged search engine, although DuckDuckGo has at least shown that it can be accomplished with privacy in mind.

The idea of an Apple search engine has been speculated since at least 2015, when Apple first confirmed its Applebot and posted a series of search-related job listings.

For now, Applebot likely remains dedicated to improving Siri and Spotlight search results, as Apple states in its support document. During its WWDC keynote in June, for example, Apple said that Siri can provide over 20 times as many facts as three years prior.

Picard J.L.
I'd switch in a heart beat. Can't be worse than Duck Duck Go.
Score: 14 Votes (Like | Disagree)

Apple Knowledge Navigator
Perhaps Apple is looking to rethink how we 'search' for things on the internet.

It's become second nature that we just click on a box, type something, and then a bunch of text results appear - so perhaps Apple wants to try a different take on this. Maybe they would reorganise how all the information relating to that result appears, so as to adapt to how relevant the content is in relation to the results?

Either way I'd try it an a heartbeat. I think the whole concept of searching for something is ripe for change, given it really hasn't fundamentally altered since the birth of the search engine.
Score: 11 Votes (Like | Disagree)

mi7chy
About time because it looks hypocritical when you market yourself as the champion of privacy, claim Google is evil then do this.

People laugh at Apple trying to compete with Google in maps but think they’d be able to do it with search? Seriously?

Not by out-googling google. But by doing something different. Something that isn't aimed at advertisers, but at people. Giving you the information you are looking for, not a link to someone flogging something remotely similar to it.
Score: 7 Votes (Like | Disagree)

McKodiak
This wouldn't shock me. Everything Google does is for their customers, advertisers. Consumers hate the tracking. Apple will make a search that doesn't track and is more secure.
Score: 6 Votes (Like | Disagree)

People laugh at Apple trying to compete with Google in maps but think they’d be able to do it with search? Seriously?

Apple maps is great now, I use it daily in the UK and the US, if apple are committed to the cause of course they can do search
Score: 6 Votes (Like | Disagree)
Read All Comments