Topping the news headlines once again this week was the dispute between Apple and Epic Games, which continued to rage with no signs of de-escalation. The conflict hasn't dampened investors' enthusiasm for Apple's stock, however, as Apple this week became the first U.S. company to reach a market capitalization of $2 trillion. 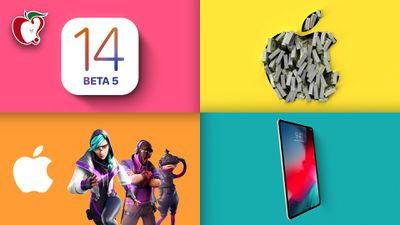 Other news this week include rumors about future iPad Air and iPad Pro updates, some more changes in the latest beta of iOS 14, and an update to Apple's policies that will give users up to a year to purchase AppleCare+ warranty and accidental damage coverage for a broad array of Apple products in the U.S. and Canada.

Read on below for details on all of these stories and more from the past week!

Epic Games Sought Side Deal for Fortnite Prior to Lawsuit, Apple Says in Court Filing

It was just a week ago that things blew up between Apple and Epic Games, and a lot has happened since then, so we've been regularly updating our timeline of the events leading up to and major developments in the clash between the two companies.

In short, Epic Games strategically violated Apple's and Google's rules for in-app purchases, launching its own payment system for in-game currency in its hit game Fortnite. Apple and Google pulled Fortnite from their app stores, and Epic quickly responded with lawsuits and PR campaigns against the companies, with a major focus on breaking up Apple's firm control over app distribution on iOS and the revenue share it takes.

For its part, Apple has said that it "won't make an exception for Epic" and will terminate Epic's developer accounts if Fortnite isn't brought into compliance with App Store rules by August 28, a move that would affect the numerous developers that rely on Epic's Unreal Engine game engine. Apple is also disputing Epic's claims that it wasn't seeking a special deal with Apple to allow its own in-app purchase mechanism, as a new filing by Apple says that's exactly what Epic wanted.

With Fortnite removed from the App Store, some enterprising eBay sellers have taken to offering iPhones with Fortnite already installed, in some cases asking for thousands of dollars. Meanwhile, Epic is hosting a "#FreeFortnite Cup" this weekend as one last hurrah for cross-platform play before existing Fortnite players on iOS are "left behind" when the next game update drops.

Just two months after becoming the first U.S. company to reach a market capitalization of $1.5 trillion, Apple has reached another milestone by being the first to hit $2 trillion.

Apple's share price has more than doubled since its low point just five months ago, and the company will be completing a four-for-one stock split at the end of this month. That should bring Apple's share price down to the $100–$125 range, but with four times as many shares in circulation, it will not affect the company's overall market value.

And Apple may not be done yet, as the company's share price has continued to surge toward $500, with one analyst saying a bull-case scenario could drive the stock to $600 (on a pre-split basis) on the strength of an iPhone 12 "supercycle."

Apple this week seeded a fifth beta version of iOS 14 and iPadOS 14 to developers and public beta testers, and the company is continuing to tweak things as an official launch approaches.

There's a new "tall" Apple News widget size option for the Today View, new privacy settings for widgets, a new "wheel" design for setting alarm times in the Clock app, a new option to prevent the Hidden album in Photos from showing up in the album list, and more.

iPad Air 4 Said to Launch in March 2021 With A14 Processor, iPad Pro Update Possibly Next Month

Apple will launch the iPad Air 4 in March 2021 with an A14 processor, according to sources who also corroborate previous rumors that Apple will bring the ‌iPad‌ Air 4 much closer to the current iPad Pro in terms of design and features.

The ‌iPad‌ Air 4 will reportedly have a Smart Connector on its rear to support the new Magic Keyboard, while it is apparently set to transition from the Lightning Connector to USB-C and feature four stereo speakers.

The report also claims that an updated ‌iPad Pro‌ could arrive as soon as next month, presumably alongside new iPhones at Apple's usual fall event. Rumors have, however, been mixed on when an updated ‌iPad Pro‌ sporting Mini-LED display technology may arrive, with the earliest projections claiming this fall and the latest claiming the first half of 2021.

Apps designed for the Mac don't often receive as much coverage as apps designed for iPhones and iPads, which is why we have a series here at MacRumors that highlights interesting Mac apps worth checking out.

Apple Giving Users in U.S. and Canada Up to One Year to Buy AppleCare+

Apple is significantly extending the window in which users in the U.S. and Canada can purchase an AppleCare+ extended warranty with accidental damage coverage. Apple has typically allowed users to purchase AppleCare+ up to 60 days after buying a device, but that window will now be extended to one year, although users will have to visit an Apple retail store to have their devices examined for any damage.

kesennnnn
Can’t wait for the September announcement, regardless of what it is.
Score: 1 Votes (Like | Disagree)

mrxak
Remaining interested in the iPad Pro refresh, but hopefully there is significantly more RAM. The iPad Pro is an outstanding art tool with Procreate, better than Wacom Cintiq and <pick your favorite raster PC/Mac software>, but RAM remains a limiting factor for complex, high-resolution projects, namely large format artwork for printing. If Apple were to put a little more effort into seizing the art market, within a few years they could completely dominate the professional as well as hobbyist scene.
Score: 1 Votes (Like | Disagree)

JosephAW
The only way I'd update from my 11 pro max is if the 12 has a periscope camera. :p
Score: 1 Votes (Like | Disagree)
Read All Comments