With Fortnite currently banned from the App Store and Epic Games on the verge of having its Apple developer accounts terminated for violating ‌App Store‌ rules by rolling out its own payments system for in-game currency, Epic is hosting a #FreeFortnite Cup this Sunday for "one more Victory Royale with friends across all platforms." 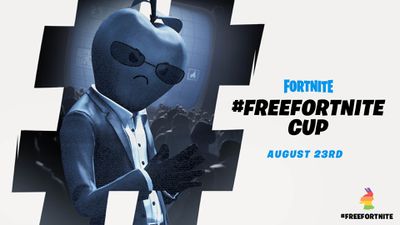 Fortnite users who already have the game installed on their iOS devices are currently able to continue playing the game, but they will be "left behind" when Chapter 2 - Season 4 launches on August 27 as Epic won't be able to push the game update to those users.

As part of #FreeFortnite Cup, Epic is offering a host of prizes ranging from an in-game outfit and a physical "Free Fortnite" hat to hardware such as Alienware laptops, Samsung Galaxy Tab S7 tablets, OnePlus 8 phones, and Xbox One X and Nintendo Switch gaming systems.

If you’re left behind on iOS after the Chapter 2 - Season 4 launch, the party continues on PlayStation 4, Xbox One, Nintendo Switch, PC, Mac, GeForce Now, and through both the Epic Games App at epicgames.com and the Samsung Galaxy Store. Join the fight against @AppStore on social with #FreeFortnite.

All of your friends. Awesome prizes. And one bad apple. We’re droppin the #FreeFortnite Cup.

Finally, Epic is sharing tips for iOS users worried about being unable to continue playing Fortnite, recommending that they make sure their game data is stored in their Epic accounts and investigate alternative Fortnite-compatible devices where they can simply pick up where they left off. For Android users, Epic notes that users can still install it through other means such as Samsung's Galaxy Store or sideloading, despite the game having also been pulled from the Google Play store.

farewelwilliams
Epic is that person in the room where he shouts "Fine! I'm leaving!" and keeps looking back on the way out to see if anyone would care.
Score: 89 Votes (Like | Disagree)

how much should Apple take?

It’s funny to me people can’t understand Apple’s side. They are a business... Apple funds the R&D, designs the hardware, OS, App Store, runs the servers for the apps, markets the apps and some how are expected to do it for what? free, 1% 5% 10% 20%.

In you educated estimation what would it cost Apple to do this?

If you ran Apple what would you take and why?

Who decides how much they take? A random dude on the internet? The government? Why is it anybody’s but Apples decision? They own the store.

They are a company that needs to make money to pay for staff, R&D, parts, marketing and what ever else is needed to run a highly successful tech company. Oh and make a profit too.

No one is forcing Epic to use the App Store. There are many other platforms they can use. It just happens to be the best out there. Because Apple put a lot of work and money into making it what it is. A place where developers and people can distribute and buy apps very easily.

Also, No one, including Apple, is stopping Epic from marking their own hardware and OS and allowing themselves and others to use it for free.
Score: 49 Votes (Like | Disagree)

SteveW928
If I were a Fortnite player, I'd be kind of tweaked off at Epic at this point. Probably a good idea to just find some other game to play, or do something more constructive with your time.

So... does Epic think everyone is going to run out and buy new hardware, just because they decided to start a fight with Apple?
Score: 45 Votes (Like | Disagree)

Art Mark
10 year olds around the country are in a panic.
Score: 36 Votes (Like | Disagree)

savink
A perfect example where a greedy Game developer wants its users/fans to invest in new devices but not ready to share 30% of its revenue earned from the platform to the platform.