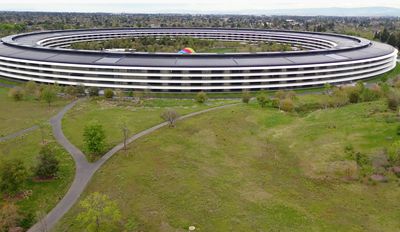 Some employees, such as hardware and software engineers, began returning to ‌Apple Park‌ in May. Some of the people who are working at the campus are doing so for just a few days a week, with Apple limiting the number of people allowed in closed spaces, such as elevators.

Employees who return to the campus are being provided with an option to take a coronavirus nasal-swab test, while temperature checks are mandatory. Apple has closed many of its break room kitchens, and is asking employees to wear masks through posted signs.

‌Apple Park‌ features large open work spaces where employees worked in close proximity, but Bloomberg says that Apple is going to need to make changes to bring the rest of its workforce back to the campus. For now, some employees are continuing to work from home.

Apple's head of retail and people Deirdre O'Brien told employees in May that the return to Apple's campuses worldwide would be done in phases over the course of a few months. The first phase, in which some employees are returning, is in progress now.

A second phase in July will see more employees return to work, though Apple has said that its plans are fluid and may change based on local and state stay-at-home orders.

Apple has also begun reopening its Apple retail locations worldwide, and in the United States, more than 100 stores are open. Many of these locations are limited to device pickups and repairs.

Erehy Dobon
Apple isn't forcing anything. They are following guidelines set by the County of Santa Clara (SCC) Public Health Officer, specifically as it pertains to essential business operations in offices.

But don't listen to me, go knock yourself out on the original SCC document:

which actually uses Google and Apple as examples. Just use Command-F and search for "goog" or "apple" in your web browser.

This is an amended document from the May 22 order which started letting more people back into their offices.

Apple is not doing anything special that Google, Cisco, Intel, AMD, HP, Adobe, NVidia, etc. aren't doing. If Facebook is doing something different (which I doubt), that's because they are headquartered in San Mateo County, just adjacent to the north of Santa Clara County.

It's worth pointing out that the senior management of all of these large corporations have been in repeated close and ongoing consultation with the County of Santa Clara COVID-19 response team.

Apple is not the first company on this planet to let people start returning to the office. There is now ample precedence in many other jurisdictions around the planet about these phased returns.

It is also very worth pointing out that Santa Clara County actually led the entire nation in their shelter-in-place policy and is one of the slowest counties to lift restrictions within the state. SCC is not blindly walking into unchartered territory, not while Dr. Cody is at the helm.

Rogifan
So Apple is doing what every other company is doing. Must suck for Mark Gurman. Now that he’s not getting any juicy rumors anymore he’s reduced to publishing banal stuff like this.
Score: 5 Votes (Like | Disagree)

now i see it
So much for the "open office" layout that has been all the rage - getting rid of cubicles so that everyone is within eyeshot (aka call center layout).
The future might require a total rethinking (and remodeling) of office layouts with cubicles returning but with hermetically sealed walls all the way up to the ceiling.
Oh well.
Score: 3 Votes (Like | Disagree)

Williesleg
They should all work from home.
Why is apple forcing this?
Score: 3 Votes (Like | Disagree)

glowplug
Who could have guessed this would be the final nail in the coffin of open floorplans.
Score: 2 Votes (Like | Disagree)
Read All Comments