This week saw an interesting mix of news and rumors on the Apple front, led by the release of macOS 10.15.5, which brings a new battery health feature to newer Mac notebooks, while we also saw the official announcement of new colors for the Powerbeats Pro earphones. 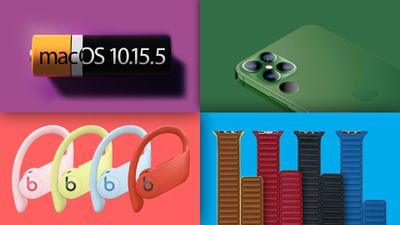 On the rumor front, we heard a few tidbits about not just this year's iPhone 12 but also next year's iPhone, while we saw photos and videos of a new style of Leather Loop Apple Watch band. And finally, there was a weird iOS bug last weekend that saw users unable to open some popular apps. Apple fixed the issue, although it appears to have required users to redownload a bunch of recent app updates.

Read on for more details on all of this week's top stories!

After releasing operating system updates for most of its products last week, Apple this week pushed out macOS Catalina 10.15.5, an update that brings a new battery health management feature to recent notebook models, as well as some other updates and bug fixes.

Not all of the changes are being greeted with applause, however, as there appears to be a bug related to creating bootable backup drives, and a change by Apple will make it harder for users to escape being nagged to upgrade to the latest macOS updates going forward.

Apple Confirms 'No Longer Shared' App Bug Has Been Fixed

Late last week, many iOS users found themselves unable to open a number of popular apps, with their devices displaying a "This app is no longer shared with you" alert whenever an affected app was launched.

While there were some workarounds for the issue, Apple ultimately fixed the issue late Sunday, but it required reissuing recent updates for a number of apps, which for many users resulted in dozens or even hundreds of app updates.

On Tuesday, Apple confirmed that it had fixed the issue, although it didn't offer any additional explanation about the cause of the problem.

Noted Twitter leaker @choco_bit has shared that the iPhone 12 will unsurprisingly continue to feature a Lightning port for charging rather than transitioning to USB-C, but it's what the leaker has to say about next year's iPhone that's more interesting.

Apple will reportedly be eliminating the charging port entirely on the 2021 iPhone, shifting to a Smart Connector similar to that seen on recent iPad models to allow for power and data transfer with accessories like keyboard cases.

MacRumors mockup based on 2021 iPhone camera rumor
A separate rumor from @choco_bit indicates that the 2021 iPhone could include four camera lenses in the 40- to 64-megapixel range, in addition to a LiDAR sensor for augmented reality purposes. The leaker says the rumor should be taken with a "huge amount of salt," so we won't put too much stock in it just yet, but it's an interesting claim that bears watching.

Following a couple of leaks in recent weeks, Beats today is officially announcing four new colors for its Powerbeats Pro wireless earphones: Spring Yellow, Cloud Pink, Lava Red, and Glacier Blue. The new earphones will go on sale June 9 and sell for the same $249.95 price as the existing color options.

Aside from the colors, the new ‌Powerbeats Pro‌ models are otherwise identical to the original Powerbeats Pro, offering up to nine hours of listening time with the charging case bringing the total listening time to over 24 hours. Apple's H1 chip brings easy pairing, seamless switching between devices via iCloud, and "Hey Siri" functionality, while on-ear volume and track buttons on each earbud offer simple controls and adjustable earhooks help secure the earphones during vigorous workouts.

Recently surfaced photos and videos show what could be a redesign for Apple's Leather Loop Apple Watch band, shifting from a single-piece loop style to two pieces that attach magnetically.

It remains to be seen whether these are ready for launch in the near future, perhaps at WWDC next month or in September alongside the Apple Watch Series 6. Alternatively, these could be prototypes that were ultimately scrapped, or even knockoffs meant to mimic Apple's band style.

Jailbreaking to install unauthorized apps and modifications on iOS devices has waned in popularity over the years, but the team behind the "unc0ver" jailbreaking tool has released a blockbuster new update that claims to be able to jailbreak "every signed iOS version on every device" ranging from iOS 11.0 to iOS 13.5.

Apple will undoubtedly move to fix the vulnerability that allows the jailbreak to work, so expect to see a new iOS update in the not-too-distant future.

macfan90
Mac > stupid news about ear bud colors or a watch band. If no iMac hardware comes by WWDC, then Apple proves they don’t care about Macs and hardware. I miss the old days when you could predict upgrades like clock work. The stupid iPhones get it each year but Macs are out in the cold. So long Apple.
Score: 3 Votes (Like | Disagree)

Mac > stupid news about ear bud colors or a watch band. If no iMac hardware comes by WWDC, then Apple proves they don’t care about Macs and hardware. I miss the old days when you could predict upgrades like clock work. The stupid iPhones get it each year but Macs are out in the cold. So long Apple.

Except that Apple just released new MacBook Airs and MacBook Pros, both of which are excellent.
Score: 2 Votes (Like | Disagree)

Apple doesn't keep up with showing care to their desktops like a decade ago.

Desktops are kind of niche these days
Score: 1 Votes (Like | Disagree)

Mac > stupid news about ear bud colors or a watch band. If no iMac hardware comes by WWDC, then Apple proves they don’t care about Macs and hardware. I miss the old days when you could predict upgrades like clock work. The stupid iPhones get it each year but Macs are out in the cold. So long Apple.

Disagree...Over 80% of Apple revenue is driven by iPhones!...can't blame Apple or any business for following the money!
Score: 1 Votes (Like | Disagree)

Mac > stupid news about ear bud colors or a watch band. If no iMac hardware comes by WWDC, then Apple proves they don’t care about Macs and hardware. I miss the old days when you could predict upgrades like clock work. The stupid iPhones get it each year but Macs are out in the cold.

Oh, brother. New iMacs just last year - I have one and it's great.

Sure, enjoy Windows 10.
Score: 1 Votes (Like | Disagree)
Read All Comments

Wednesday November 30, 2022 2:39 am PST by Sami Fathi
Geekbench scores allegedly for the upcoming "M2 Max" chip have surfaced online, offering a closer look at the performance levels and specific details of the forthcoming Apple silicon processor. The Geekbench results, first spotted on Twitter, are for a Mac configuration of with the M2 Max chip, a 12-core CPU, and 96GB of memory. The Mac listed has an identifier "Mac14,6," which could be...
Read Full Article • 204 comments