An app bug is causing some iOS users to be unable to open their apps, with affected iPhone and iPad users seeing the message "This app is no longer shared with you" when attempting to access an app. 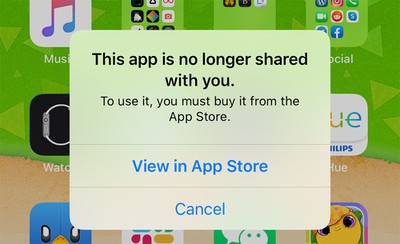 There are multiple complaints about the issue on the MacRumors forums and on Twitter from users who are running into problems. A MacRumors reader describes the issue:

Is anyone else experiencing widespread app crashes? I am suddenly being informed that "this app is no longer shared with you" from several iOS apps. When I follow the prompt to the app's App Store page, the only option is to "open" which then just puts me back into the same loop.

Dozens of Twitter complaints suggest the issue is affecting people running both iOS 13.4.1 and iOS 13.5, and it's not clear what's causing the problem as not everyone appears to be affected. Some users have had the problem occur after updating apps in the last day.

There have been complaints about many apps including YouTube, Twitter, WhatsApp, Facebook, TikTok, LastPass, and more. We updated the WhatsApp app an ‌iPhone‌ on iOS 13.5 prior to writing this article and immediately got the error message.

How to Fix 'This App is No Longer Shared'

People impacted by the issue have been able to fix their apps by deleting the app that's not working and reinstalling it. Offloading the app rather than deleting it will also fix the problem. The benefit of Offloading an app is that you won't lose any data, and you can pick up right where you left off.

To offload, go to Settings -> General -> ‌iPhone‌ Storage -> Scroll down to the App with the problem -> Tap on the App Name -> Tap on Offload App

zorinlynx
Remember us free software fans who back in the 90s warned everyone about DRM and how insidious it is and how it will keep you from using your own software on your devices eventually?

Well, here we are. A stupid bug is keeping us from running even free applications.

EDIT: I bought Apple devices and didn't follow my own advice, I know. I'm just grumbling about stupid this all is. It's so unnecessary.
Score: 39 Votes (Like | Disagree)

Remember us free software fans who back in the 90s warned everyone about DRM and how insidious it is and how it will keep you from using your own software on your devices eventually?

On balance, what we have now is better.
Score: 17 Votes (Like | Disagree)

IPPlanMan
Too much time spent on the wrong things....

Apple needs to get back to the "It Just Works" days, narrow its focus, and make its products more reliable.

Do a feature/development freeze for 90 days and focus solely on bug fixes in iOS 13. We don't need iOS 14 right now in my opinion.
Score: 15 Votes (Like | Disagree)

Scottsdale
I just had this happen to me with YouTube today!!! Sucks! Another iOS bug. Apple used to have hardware that worked well because it cared so much about software. If Apple doesn’t watch out, it will lose its dominance like Blackberry once did. Someone will come along and make great software that works with the hardware in an ecosystem and Apple’s lead will vanish overnight. I cannot wait for the day!!! So sick of Cook’s Apple. Make Apple Great Again. Hire a “product person” as CEO!!!
Score: 13 Votes (Like | Disagree)

mixxster
What app is that in the screenshot with the thicc cat and lasers in the icon - in the folder to the right of Apple Music? I gotta have it.
Score: 9 Votes (Like | Disagree)