The next-generation iPhone 12 lineup coming in fall 2020 isn't out yet, but Fudge (@choco_bit), a leaker who sometimes shares information on upcoming Apple devices, today offered up details on what Apple has in store for the 2021 iPhone 13's camera setup. 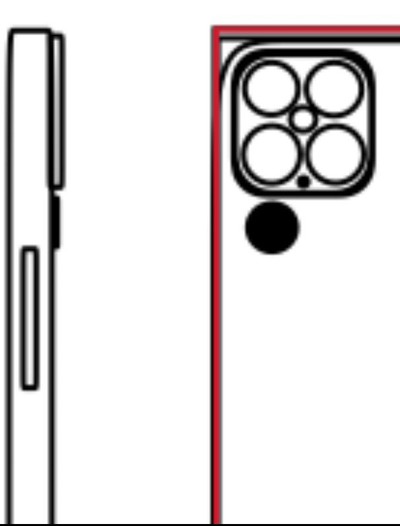 A simple design drawing depicts a device with a four camera array, which Fudge claims will have the following features:

The leaker says that the information should be taken with a "Huuuuugggeeeee amount of 🧂," suggesting the source of the rumor is questionable or it's so early that the camera setup could change. Apple makes plans for iPhones well ahead of when a new device is released, but plans change and are tweaked and there's quite a ways to go before the ‌iPhone 13‌'s final design needs to be nailed down.

The rumored ‌iPhone 13‌ camera is wildly different from what's in the iPhone 11, and while Apple does make major camera improvements each year, the company has thus far shied away from super high megapixel cameras in its iPhones.

There have been some rumors indicating the ‌iPhone 12‌ models coming in 2020 could get a 64-megapixel wide-angle camera along with a telephoto lens that supports 3x optical zoom (up from 2x), but we've heard surprisingly little about the camera technology.

Most rumors have focused on the inclusion of 3D camera technology in the ‌iPhone 12‌, which is expected to be similar to the LiDAR Scanner feature that Apple introduced in 2020 iPad Pro models.

Update: YouTuber Jon Prosser says that the image associated with the detail is "not real" and that the iPhone coming in 2021 will feature the same layout as the 2020 ‌iPhone‌.

Leaker L0vetodream, who has also shared accurate information about Apple's plans, says that the ‌iPhone 12‌ and the ‌iPhone 13‌ will look different, however, seemingly agreeing with the original rumor.

szw-mapple fan
Finally we are getting a proper stovetop.
Score: 53 Votes (Like | Disagree)

B4U
Like I said last time.
https://forums.macrumors.com/threads/leaked-iphone-12-pro-max-schematics-show-thinner-design-smaller-bezels-lidar-camera-and-more.2231294/post-28374066
The Arnold case will finally be movie-correct instead of missing one of the launchers.

trigf
Our phones are going to look like the Mac Pro grille by 2030
Score: 26 Votes (Like | Disagree)

bluespark
This has to be true, because I don't think it's possible to fake a design drawing like that one.
Score: 25 Votes (Like | Disagree)

The leaker says that the information should be taken with a "Huuuuugggeeeee amount of ?," suggesting the source of the rumor is questionable or it's so early that the camera setup could change.

Wouldn’t this mean it should be taken very seriously? “A grain of salt” should mean insignificant, while I would think a huge amount of salt would be significant.
Score: 22 Votes (Like | Disagree)

BF1M
My sources are telling me it has a built in tripod as well.
Score: 12 Votes (Like | Disagree)
Read All Comments