Images of a new version of the Leather Loop that Apple appears to have in development surfaced yesterday, and today, Vietnamese site Tinhte.vn has shared additional photos and videos that give us a clearer picture of what to expect from the new band.


The bands come in colors that include red, hot pink, blue, black, and brown, with some of the bands featuring different colored accents at the side. The design features more distinct ridging that does not extend to the edge of the band, and it features the same cowhide logo and "Natural Leather" wording that's on the original Leather Loop. 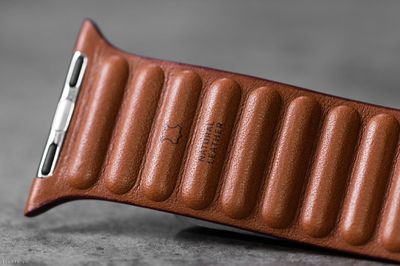 While the current version of the Leather Loop fastens with a loop-style closure similar to the Sport Loop, the new model attaches to the wrist magnetically. Tinhte.vn's bands are all 44mm, but the images shared yesterday suggest there may also be a 40mm version in the works. The current Leather Loop is limited to the larger watches.

The bands appear to feature waterproofing properties that make them suitable for a wider range of activities than the current Leather Loop bands, and they also have a sportier, more casual look to them.

There is a possibility that Apple will sell these bands alongside the existing Leather Loop options as a new band type, but given the similarities between the designs, the new bands could also be a full replacement for the current Leather Loop.

There's no word on when these new bands might launch, but given that they appear to be finished, we could perhaps see them as early as WWDC. Apple often refreshes Apple Watch band colors alongside major events, so it would not be unusual to see a summer release of a new band option.

Alternatively, Apple could save these new bands for release alongside the Apple Watch Series 6 models in the fall.

ruka.snow
I must be dreadfully behind the times. I look at these and all I can think is a kids watch band made with premium materials.
Score: 25 Votes (Like | Disagree)

MacDevil7334
It’s like they took a puffy North Face jacket and made it into a watch band. It doesn’t even look like it’s made of leather. Really not a fan of this look.
Score: 18 Votes (Like | Disagree)

cmaier
Oofa. I find these to be very ugly. Look almost toy-like.

M.A.G
Looks ugly. The ridges are too big
Score: 11 Votes (Like | Disagree)