Apple is working on a redesigned version of the Leather Loop band that could be as soon as next month, according to leaked information shared today on Reddit and by 9to5Mac. 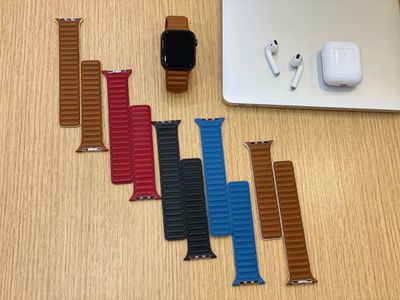 The updated bands appear to have more distinct ridges that do not extend to the edge of the band and for some colors, accent edging in a different color. The photos shared on Reddit depict the bands in brown with two colors of accent edging, red, orange, black, and blue. Rather than fastening with a loop, the redesigned version uses magnets to close.


It's not clear why Apple would redesign the existing Leather Loop band, which has been available since the launch of the original Apple Watch in 2015. The new models could offer improved breathability, better water resistance, or both, and Apple could perhaps expand availability to smaller Apple Watch models.

Current Leather Loop bands only fit the 44mm Apple Watch, and the leaked images seem to depict two sizes. There's also a possibility that the Leather Loop bands will continue to exist and that these bands are something else, as they don't have a loop design.

The person who shared the images on Reddit says they're from a local shop in Vietnam that called the bands "experimental units for the next generation of Apple Watch." 9to5Mac says that it was also contacted by a tipster with similar images and that source said the new Apple Watch bands could be unveiled as soon as next month, perhaps during Apple's WWDC announcements and product releases.

Apple often refreshes Apple Watch band colors alongside major events, so it would not be unusual for new band colors and options to come out in the summer.

There's no word on when these bands will come out nor is it clear if these are actually Apple-designed bands or if they're a faked version, so we'll have to wait to see if Apple actually ends up releasing them.

Itsedstech
For even easier use compared to v2 if they resurrect AirPower?
Score: 5 Votes (Like | Disagree)

Bazooka-joe
Yeah I prefer the old design as well
Score: 5 Votes (Like | Disagree)

KPOM
Interesting. More choices would be better, particularly for the 40mm model.
Score: 4 Votes (Like | Disagree)

44267547
The original leather loop is by far Apples most comfortable band made. (I have the brown variant). What’s actually surprising about the Leather, is how strong the magnets are, where I haven’t had any issues or I need to readjust it multiple times throughout the day. It’s A bit underrated, probably because it’s out of the price range for consumers to want to spend, but it is well-made, It even develops nice patina after a while.

This new alleged/rumored version looks seemingly cheaper, which I’m sure is probably the goal to offer the consumer, given the leather loop is fairly expensive.
Score: 4 Votes (Like | Disagree)
Read All Comments