Apple is bringing some significant updates to several of its education apps, led by a new Schoolwork 2.0 for iPad and Mac, reports CNET. 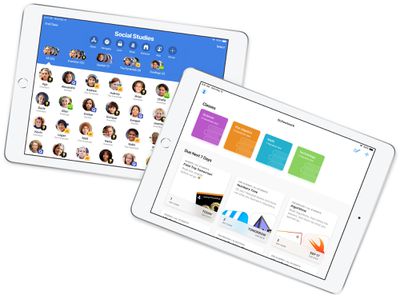 Apple designed Schoolwork 2.0 to include features found in other iPad OS apps, like Files, and to speed up navigation around the software. There's a new Handout library with a source list on the left side that makes it easier to navigate to different classes or the student's library with drafts and favorites. On the right are cards with things like reminders for a field trip or a math assignment.

Other new features include a redesigned Handout detail view and new communication integration to let teachers FaceTime or message students at a tap.

In addition to Schoolwork, Apple is also updating its Classroom app for ‌iPad‌ that functions as a teaching assistant within a classroom to launch apps and websites across all devices in a classroom, share a student's screen to the teacher's ‌iPad‌ or a classroom Apple TV, share documents, and more.

The updated versions of Schoolwork and Classroom are coming "soon," according to CNET, with no specific launch dates given.

Expos of 1969
It is a shame they have lost the education market. Devices are too expensive in most cases. They had the market and then really lost the plot.
Score: 14 Votes (Like | Disagree)

Blackstick
Probably a good time to have an answer for Hangouts/Zoom/Teams that's more robust than FaceTime, honestly.
Score: 9 Votes (Like | Disagree)

oldmacs
If Apple wants the education market, it needs software that is Multiplatform... That's why Google has succeeded imho.
Score: 9 Votes (Like | Disagree)

It is a shame they have lost the education market. ... They had the market and then really lost the plot.

I don't know that it was just expense—I live in, and send my daughter to, a school district that is lucky to be very well funded, and generously supported by organizations like the PTO. Yet despite this surplus, iPads are few and far between, and are slowly being phased out in favor of the dominant Chromebooks using technologies like Google Classroom and Schoology.

Apple has an enormous amount of hubris about how they want education to work, versus how it actually works, and that's why their solutions are largely being cast aside regardless of financial resources. Apple wants to sell hardware—for Apple, it's about moving iPads as an end goal in itself; education wants a service, less-so the hardware, so they can be more self-deterministic on how to physically provide that service. Their competitors have no such preconceptions and focus on creating solutions that are self-sustaining and relatively easy for educators to administer. Until that idea sinks in at the executive level in Cupertino, Education is a lost cause for Apple.
Score: 6 Votes (Like | Disagree)

bag99001
Apple won’t admit the bottom line for schools is price. It’s a shame because what kids are doing on chrome books is pathetic. It’s essentially the same word processing that was happening on Apple IIs in the 90s rather than the creative work you can do on an iPad or full featured computer. Districts don’t care though...at least no one on top making the decisions. Apple has got to do more to highlight the creative and learning potential of their products and how poor the alternatives are. Most people don’t know any better and simply see x number of devices needed and the cost per device.
Score: 5 Votes (Like | Disagree)

DJLC
Former K-12 CTO here... Schoolwork was DOA in my opinion, and Classroom is only cool because it brings ARD functionality to iPadOS. Outside of that, it's duplicative of an LMS that most schools are already paying for. I couldn't justify supporting and training YET ANOTHER platform just because Apple wants to play EdTech company.

Other posters here have it spot-on: Apple devices are not cost effective for 1:1 student deployments. Last time I got new devices for my kids, I talked to our Apple Edu rep and all but BEGGED him: help me help you win this bid. Couldn't do it. We went Chromebook for the kids and MacBook Air for the staff. For less than the cost of naked iPads with no cases, no warranty, and no management, I got Chromebooks with a 3-year accidental damage warranty, 6 years of management, and white glove service so they were already labeled, inventoried, and enrolled when they arrived. I handed them out to kids new-in-box. Yes, kids can make more multimedia on an iPad than a Chromebook, but here's the thing: they weren't doing that when they had MacBooks; they weren't doing it when I switched them to iPads; so how can I justify the premium for an Apple device when none of the benefits are actually benefits? How about instead I get them Chromebooks and have a mobile lab of 5 MacBook Pros for the occasional multimedia projects? Way more cost effective, and even the Apple Edu rep couldn't argue that point.
Score: 4 Votes (Like | Disagree)
Read All Comments