Two images shared on social media this morning are currently stoking speculation about possible hardware redesigns coming to the iPhone 12 and the potential introduction of Home screen widgets in iOS 14. 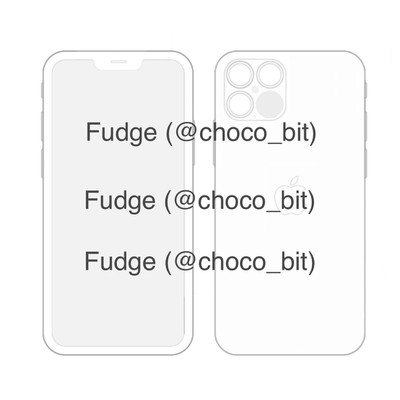 Shared by Twitter user Fudge (choco_bit), the images depict a front and rear graphical representation of a smartphone with interface elements on the screen, suggesting it came out of a tutorial or support documentation.

Two focuses of interest are the size of the device's notch, which appears to be about a third smaller than the one currently found on iPhones with Face ID, and a new camera setup on the rear of the device showing a revised lens array.

Apple analyst Ming-Chi Kuo believes that at least one new iPhone in 2020 will feature a smaller front camera lens for an improved screen to bezel ratio, ultimately resulting in a smaller notch at the front.

Meanwhile, the redesigned camera array is generating online chat about rumors of a new 3D camera coming to the ‌iPhone 12‌, similar in design to the LiDAR scanner on the new 2020 iPad Pro.

Elsewhere, on the device's main display are what look like ‌widgets‌ in amongst icons on the Home screen. As part of a new feature set coming in ‌iOS 14‌, Apple is also thought to be working on bringing widgets to the ‌iPhone‌ Home screen for the first time.

We're bringing these images to the attention of readers mainly for the purposes of discussion, since the source is not an established leaker and there's no way to verify the legitimacy of the pictures.

I love the notch, i’m pretty happy to see it still in iPhone 12 design! Smaller is better for sure, maybe more space for control center/system icons.
BTW I don’t like idea of widget in home screen, I would be more iOS/clean to have them only in one page as it is now.

you love the notch but happy to see it smaller? so eventually when its the smallest and gone you will praise apple for reducing it to nothing.
The notch is a limitation in technology nothing more. Its not a design idea. If the tech was there to have a behind the screen camera with all the tech we have now we would never of seen the notch.
While I don't mind it that much it is really an eyesore and cuts into a lot of the information we are missing. Ill be happy to see it go and real true full screen phones with no popup cameras start showing up.
Just look how much space the notch plus the under notch bar in safari is. Thats a good 1/4" to almost 1/2" of space we are losing because of the way the notch cuts into the screen/top bar.
Score: 34 Votes (Like | Disagree)

Falhófnir
The 'widgets' remind me a bit of Windows Phone's live tiles, which was actually quite a nice balance between organised and dynamic. Looking forward to this feature if legit!
Score: 19 Votes (Like | Disagree)

ikir
I love the notch, i’m pretty happy to see it still there in iPhone 12 design! Smaller is better for sure, maybe more space for control center/system icons.
BTW I don’t like idea of widget in home screen, it would be more iOS/clean to have widgets only in one page as it is now.
Score: 18 Votes (Like | Disagree)

OnTheCatwalks
Now if only they could get the rear cameras to sit flush again. That is my only issue with the 11.
Score: 17 Votes (Like | Disagree)

VSMacOne
These just seem like poorly made Photoshop drawings. You can zoom in on the notch and the bottom right part of the photo and notice some irregularities...