Tim Cook: The Ethos and DNA of Apple 'Have Never Been Stronger on the Innovation Front'

Apple CEO Tim Cook this week spent time in Japan, and during his trip, he sat down with Japanese news site Nikkei to cover familiar topics like privacy, manufacturing, and health. 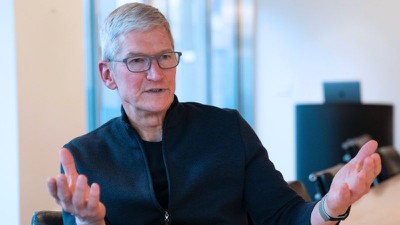 Cook said that Apple does manufacturing by looking at "all countries" and seeing what skills are available. "We pick the best," Cook said. He pointed out that Apple has created well over two million jobs in the United States, and says there's "enormous manufacturing" happening there. "Just not the assembly of the final product," he said.

On the topic of Apple's ability to innovate, Cook said that the smartphone market has not yet reached its peak and there are still advancements to come.

Cook went on to say that he believes Apple's greatest contribution to humankind will be in health, something that he's said several times before. He specifically pointed out the ECG function of the Apple Watch as evidence of Apple's progress.

Cook also spoke about competition and monopolies, claiming that Apple has "more competitors than any company on earth." Apple is facing regulatory investigations in the United States and Europe over its App Store policies amid accusations that Apple has an unfair advantage over third-party app developers.

"A monopoly by itself isn't bad if it's not abused," Cook said, while insisting that Apple does not have a monopoly in any sector. "The question for those companies is, do they abuse it? And that is for regulators to decide, not for me to decide."

Cook ended the interview with a spiel on privacy, a topic that he often covers. He reiterated once again that customers are not Apple's product, and that Apple does not believe in trafficking data.

‌Tim Cook‌'s full interview with Nikkei can be read over on the Nikkei website.

brinary001
Oh Tim, I love you man and I love Apple, but I'll have to disagree with you that innovation "has never been stronger"... You guys spent 2019 fixing your own mistakes and just giving your customers the simple requests they've had for years now. It's appreciated sure, but hardly innovative.
Score: 35 Votes (Like | Disagree)

Baymowe335
He’s right. Apple made the best iPhones ever in iPhone 11, iPad has returned to growth, wearables are exploding, and services get better all the time.

Tim Cook has done an amazing job. He’s also handled the President better than I think any CEO in America.
Score: 21 Votes (Like | Disagree)

He’s right. Apple made the best iPhones ever in iPhone 11, iPad has returned to growth, wearables are exploding, and services get better all the time.

Tim Cook has done an amazing job. He’s also handled the President better than I think any CEO in America.

Let's not forget iPadOS has truly unlocked the potential of iPad Pro to be the world's only SuperComputer for the masses.

HomePod with its awarding-winning sound profile.

Tim Cook gets it. Steve Jobs could not have made a better decision in choosing him to be his successor.
Score: 16 Votes (Like | Disagree)

Chytin
Tim Cook really loves the attention he gets from the media. I love to see an interview with him about products, state of iOS 13, Mac Pro performance, etc.
Score: 15 Votes (Like | Disagree)

Educate yourself if you think Apple hasn’t handled the President brilliantly. I’m not dignifying it with a long explanation. He’s been better than superb.

You’re always asking for proof and you can’t provide any when asked..... How anyone takes you seriously is beyond me.

Let's not forget iPadOS has truly unlocked the potential of iPad Pro to be the world's only SuperComputer for the masses.

HomePod with its awarding-winning sound profile.

Tim Cook gets it. Steve Jobs could not have made a better decision in choosing him to be his successor.

Friday July 10, 2020 11:12 am PDT by Juli Clover
Apple this month published a support document that warns customers against closing their Mac notebooks with a cover over the camera as it can lead to display damage. Image via Reddit Apple says that the clearance between the display and the keyboard is designed to very tight tolerances, which can be problematic. Covering the camera can also cause issues with automatic brightness and True Tone....
Read Full Article • 345 comments

Monday July 13, 2020 6:50 am PDT by Joe Rossignol
Earlier this year, Apple agreed to settle a U.S. class action lawsuit that accused the company of "secretly throttling" older iPhone models. Now, eligible iPhone owners are beginning to be notified about their legal rights and options. Under the proposed settlement, Apple will provide a cash payment of approximately $25 to each eligible iPhone owner who submits a claim, with its total payout ...
Read Full Article • 128 comments

Friday July 10, 2020 7:24 am PDT by Eric Slivka
Apple and Foxconn have reached a key milestone in the development of Apple's long-rumored augmented reality headset, with the semitransparent lenses for the device moving from prototype to trial production, reports The Information. Apple is developing the lenses on a single production line at a Foxconn factory in Chengdu in southwestern China, where most of Apple’s iPad production is...
Read Full Article • 88 comments

Monday July 13, 2020 4:22 am PDT by Tim Hardwick
MySmartPrice has spotted certifications for three new Apple batteries that it believes could be for the upcoming iPhone 12 lineup, despite them being less capacitive than the batteries in the current iPhone 11 series. The batteries are identified with the model numbers A2471, A2431, and A2466, and appear on Safety Korea, China's 3C, and the Danish agency UL Demko. Apple is expected to...
Read Full Article • 133 comments