Apple just released the AirPods Pro in late October, but there are already a bunch of knockoffs and replicas on the market to appeal to those who might not be able to afford the $250 asking price of the ‌AirPods Pro‌.

We picked up the $95 i500 Pro TWS Earbuds, a set of ‌AirPods Pro‌ replicas that are remarkably similar in design to Apple's real ‌AirPods Pro‌ and that even advertise some of the same features, like Apple's proprietary H1 chip. In the photos and videos below, the real AirPods are on the left.

Subscribe to the MacRumors YouTube channel for more videos.
Price wise, these fakes are $95, which is almost half the price of the ‌AirPods Pro‌. That's super expensive for a knockoff, so before reading on, know that we do not recommend purchasing these fakes or any fake ‌AirPods Pro‌ models because you're never going to get the feature set, sound quality, and build quality that you get from Apple's own earbuds. 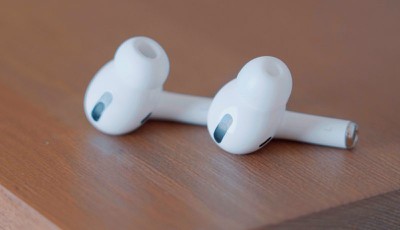 When it comes to design, the Air i500 Pro TWS look identical to the ‌AirPods Pro‌. The earbuds themselves are similar to the ‌AirPods Pro‌ with almost no design deviations, and there's even a matching Wireless Charging Case that wirelessly charges the case itself and the fake ‌AirPods‌ inside.

Just looking at the Air i500 Pro TWS next to ‌AirPods‌, you're probably not going to be able to tell the difference between the two. There are some minor design discrepancies so they're not totally identical, but if you're not inspecting them up close side by side, it's tough to tell. The Air i500 Pro earbuds do feel lighter and the lid feels a bit different in use, but again, most people might not notice.

On the website, the fake earbuds claim to have a Qualcomm chip and Apple's proprietary H1 chip that allows for quick swapping between devices, simple setup, "Hey Siri" functionality, and more, and these features do appear to work. We don't know if it's a copy of the H1 chip and there are rumors floating around that the company is using spoofed MAC addresses, but functionally, these have some of the ‌AirPods Pro‌ tech on the surface.

Connecting is similar to ‌AirPods Pro‌ in that you just need to open the case and then hold down a button on the back, and when connecting, a battery level indicator pops up on the iPhone just like the real thing. Battery levels are even displayed inside of the battery widget in the Today portion of the notification interface.

Wireless charging works, "Hey ‌Siri‌" is functional, music playback pauses when an earbud is taken out of the ear, and battery life seems to be similar to real ‌AirPods Pro‌, but the similarities end there. The i500 Pro TWS has no force sensor and does not support squeeze gestures, and the key ‌AirPods Pro‌ feature - active noise cancellation - is not included.

There are zero noise cancellation features and there's no Transparency mode either, though there is a decent seal within the ear. Sound quality isn't terrible, but it doesn't measure up to the ‌AirPods Pro‌ or the standard ‌AirPods‌. There's little bass and too much treble, and the sound is not as crisp and clear as the sound from the actual ‌AirPods‌.

Superficially, the Air i500 Pro TWS look like the ‌AirPods Pro‌, but functionally, these have none of the "Pro" features that make the ‌AirPods Pro‌ a worthwhile purchase. We don't recommend spending $95 on a knockoff version of the ‌AirPods‌, but these earbuds do provide an interesting look at how far companies will go to make fake Apple products.

alexandr
these will go along quite nicely with your rolox.
Score: 48 Votes (Like | Disagree)

If it connects like the real thing and Hey Siri works, I think that mean they've successfully reverse-engineered or cloned the H1 chip.

They first managed to a while ago with knockoff AirPods.

I had a pair for a while until I got curious, and, well…

why? wouldn't make sense for them to do that when it will sell like crazy at the current prices
Score: 15 Votes (Like | Disagree)

oneMadRssn
If it connects like the real thing and Hey Siri works, I think that mean they've successfully reverse-engineered or cloned the H1 chip.
Score: 12 Votes (Like | Disagree)

coolfactor
Mind blowing how they are able to replicate these so quickly. Or there's a compromise in the manufacturing chain that's allowing Chinese companies to begin work on their knockoffs much sooner.

I still think it's shameful how they carbon-copy the real deal and still sleep soundly at night.
Score: 11 Votes (Like | Disagree)

ouimetnick
I bought some fake AirPods back in February of this year from Wish. Paid like $40 shipped. A month later they showed up. The charging case doesn’t charge them with out being on a wireless charger on plugged in, and the cover on the case was super flimsy (since snapped off) and the battery life isn’t as good as real AirPods. BUT THEY WERE $40.

The case supports wireless charging (works well actually) and the sound is better than the AirPods. They fall out of my ears (just like the real deal) and they are quicker when you tap to pause/play. I think they are called the TWS i10. I’d recommend these over the $199 wireless charging AirPods unless you like the tighter integration of the real product. Also real AirPods come with a 1 year warranty and use genuine batteries.. Can't really speak for safety with these.

I can’t speak for these new knock offs though. I don’t understand why greedy Tim Apple couldn’t have replaced the $159 AirPods with the new AirPods with wireless charging case. $40 for wireless charging? Steve Jobs didn’t increase the price of the iPod nano when Apple added video play back to the 3rd gen in 2007. He didn’t increase the price when they added video recording in 2009. iPhone pricing stayed the same until recently. Jobs would never have offered good, better, best. He just offered the best he could at the affordable well known and liked price points.