The biggest Apple news of this week was obviously the launch of the new 16-inch MacBook Pro, which debuted on Wednesday with a new "Magic Keyboard" and some other nice upgrades.

Other popular topics this week included confirmation from Apple that the new Mac Pro will ship in December, rumors about Apple's AR headset/glasses project, a launch of the Research app that Apple previewed back in September, and some of our favorite tips and tricks for the new AirPods Pro. 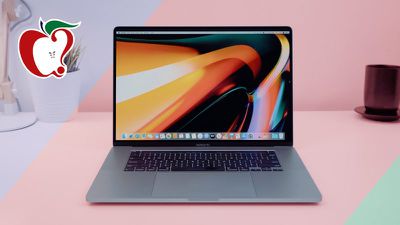 New features include a larger 16-inch display with slimmer bezels, a so-called Magic Keyboard with a redesigned scissor mechanism, a physical Esc key, up to 8-core 9th-generation Intel Core processors, up to 8TB of SSD storage and 64GB RAM, and AMD Radeon Pro 5000M series graphics.

First impressions of the notebook have praised the new keyboard, which should hopefully prove to be more reliable than the issue-prone butterfly keyboards on recent MacBook Pro models. We have an early hands-on video with the new MacBook Pro and will have more extensive coverage next week.

The new 16-inch MacBook Pro is available to order on Apple.com and in the Apple Store app, with pricing starting at the same $2,399 as the previous 15-inch MacBook Pro, which has been discontinued. In-store availability and customer deliveries have begun, and some third-party retailers are already offering discounts from Apple's pricing.

Apple Said to Release AR Headset With 3D Sensing in 2022, Followed by Sleeker Glasses in 2023

A report from The Information this week claimed that Apple plans to release an AR/VR headset with 3D sensing and advanced human detection in 2022, followed by sleeker AR glasses in 2023.

A separate Bloomberg report claimed that Apple is working on an advanced 3D sensing system for multiple upcoming products, including iPad Pro models with dual rear cameras and a new AR sensor in the first half of 2020 and new iPhones in the second half of the year.

In addition to unveiling the 16-inch MacBook Pro, Apple this week announced that its new Mac Pro and Pro Display XDR will be available to order in December. No specific date was provided.

Apple says the new Mac Pro will now be available with up to 8TB of SSD storage, up from its original promise of 4TB. The new Mac Pro will start at $5,999, while the Pro Display XDR will be priced at $4,999 with an optional $999 stand.

In this guide, we've shared 14 of our favorite ‌AirPods Pro‌ tips and tricks to help you get the most out of Apple's latest wireless earphones. We have also shared a video with many of the tips and tricks over on our YouTube channel.

Following a preview back in September, Apple's new Research app is now available on the App Store for the iPhone and Apple Watch.

The app is designed to make it easier for iPhone users to contribute to medical research. Three multi-year studies are available in the United States at launch, including the Apple Women's Health Study, Apple Heart and Movement Study, and Apple Hearing Study.

A few months ago, photographer Andrew Levitt teamed up with his friends Jacob Phillips and Taylor Gray on a one-week road trip to try to recreate all of Apple's default wallpapers included in macOS.

Just a few weeks after the video, Apple publicly released macOS Catalina, giving Levitt and his friends one more wallpaper to recreate. The task was more challenging this time, however, as the default ‌macOS Catalina‌ wallpaper showcases the remote, northern tip of Santa Catalina Island off the coast of Southern California.

To accomplish the feat, Levitt and his friends embarked on a challenging hike across Catalina Island, making for quite a fascinating video.