Apple has officially announced that its long-awaited Mac Pro and Pro Display XDR will be available starting in December. 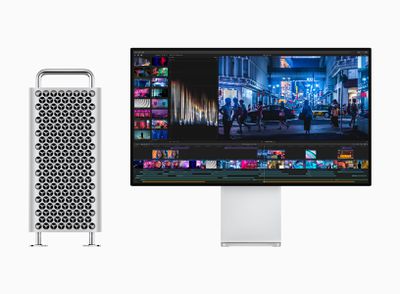 Apple also announced that the new ‌Mac Pro‌ will be available with up to 8TB of SSD storage, after originally promising up to 4TB.

The base model ‌Mac Pro‌ starts at $5,999 and features an 8-core 3.5GHz Intel Xeon processor, a Radeon Pro 580X GPU, 32GB of RAM, and 256GB of SSD storage. Additional technical specifications and configure-to-order options are available on Apple's website.

Apple is also releasing the Pro Display XDR alongside the ‌Mac Pro‌ next month. The high-end monitor costs $4,999, or $5,999 for a version with a "nano-texture" matte coating. The stand costs $999 and a VESA mount costs $199.

alleggerita
Still can’t believe that at this price point, it comes with only a 256GB SSD.
Score: 27 Votes (Like | Disagree)

Price is totally out of whack with reality and I’m in pro film and video post production...

De4our
I come here often for news on the Mac Pro, and every comment section makes the same tired jokes about pricing. I don't understand why this blows any pro user's mind. Apple offers a $1700 trade-in rebate on my trash can 12-core, and the Apple Education Discount already puts the Mac Pro at $5,500... So by the end of all of that it starts out at $3800, which to me is extremely reasonable. For those who don't realize—and I'm not trying to be condescending but the same people keep making the same joke—ANYONE can buy from the Education Store, it doesn't require verification of any kind.

I bought my trash can Mac Pro in 2014: 6-core, D700, 64gb of RAM, and Apple Care for $6700. I eventually installed the 12-core Xeon myself to keep pace with editing 6K and 8K RED footage and it can edit that footage decently on components from 2013! I'm upgrading to get the hell away from the soldered graphics cards that could potentially burn out any day now, otherwise I'd keep the damn thing another few years.

I know a lot of pro users didn't make the switch to the trash can, and I don't blame you because with your upgrade freedom on the original cheese grater Pro's you could damn near match the trash can speed for speed—and with an NVIDIA card. For those that don't have the trade-in as an option you also wouldn't expect Apple to buy back Pro's from that long ago. So for y'all, yes it's steep, but you know if your 2012 Pro lasted you this long than this new bad boy is a long term investment that will easily pay for itself with freelance work and time savings.

If you do edit RAW video from Arri, RED, Sony, etc., then you know what this beast can do for you. I suspect my "dream" config of 16-cores, 96gb of RAM, Vega II, and 1TB SSD will probably cost $3500 in upgrade BTO (judging from the upgrade prices on the iMac Pro and Newegg component prices) but that puts the final total at $7300 with the aforementioned discount, plus tax and Apple Care it'll probably be close to $8,000. Had I bought a 12-core in 2014, it would be close to or far more than that. So in my opinion this Pro is priced exactly how it should be for those who edit pro video like me, and it could last me 6+ years easily—especially with Thunderbolt 3 external GPU upgrades and internal modularity, and the ability to clean the damn thing easily whenever I want. It would be $9,700 for 2012 Pro users but again, it'd last you longer than any other Mac and the speed savings from old hardware will more than make up for that if you're getting consistent work.

TL;DR Please stop making overblown jokes about a computer being overpriced when it will save pro users valuable time (thus money) and is priced where they'd expect, and considering some of us have insanely priced cameras it's (unfortunately) a drop in the bucket for the industry we're in. If the price makes your eyes bleed then you probably never bought the other Pro's and definitely don't need this one, and it wasn't made for you.
Score: 13 Votes (Like | Disagree)

Still can’t believe that at this price point, it comes with only a 256GB SSD.

Non-issue. You can upgrade it to whatever you need.
Score: 9 Votes (Like | Disagree)

I come here often for news on the Mac Pro, and every comment section makes the same tired jokes about pricing. I don't understand why this blows any pro user's mind...

TL;DR Please stop making overblown jokes about a computer being overpriced when it will save pro users valuable time (thus money) and is priced where they'd expect, and considering some of us have insanely priced cameras it's (unfortunately) a drop in the bucket for the industry we're in. If the price makes your eyes bleed then you probably never bought the other Pro's and definitely don't need this one, and it wasn't made for you.

Simple answer is here: I'm head of finance for a small firm that includes 25 software engineers including a few that can use high performance machines. We all use Macs. We cannot justify the cost. Only the highest of high end users can honestly say that the performance difference justifies the cost. Even the majority of pro users can't justify the cost if they actually did the math. At this point it's about bragging rights and pissing distance. I am sure the $1000 monitor stand also saves valuable money in some pro users' minds as well and they can stuff Tim Cook's wallet as much as they want but they are delusional.
Even upgrading from pre-trash can Mac Pros to trash cans that are 30% faster, the top high end users who use Photoshop all day likely only save about 5 minutes a day and a lot of that 5 minutes is seen in larger effects where processes take enough time anyway that 10 seconds fewer isn't really noticed. For a process taking 3 minutes, said employees typically think of the next edit, socialize, snack, or use the toilet.

For the few thousand monitors Apple will actually sell, and the fewer stands they will sell, the marginal revenue of skimping on included standard features is not worth the loss of "heart share" they will suffer. They are turning off users, plain and simple.

Or put another way, our few employees who can use high performance will likely get 3rd party monitors instead of Apple monitors and perhaps even get older trash cans or iMacs instead of cheese graters. Apple is losing revenue from us by these price actions and we are a company of very loyal Mac users.
Score: 8 Votes (Like | Disagree)
Read All Comments