Apple Said to Release AR Headset With 3D Scanning in 2022, Followed by Sleeker Glasses in 2023

While noted Apple analyst Ming-Chi Kuo, Bloomberg, and others have claimed that Apple plans to release an augmented reality headset as early as 2020, a new report suggests that the head-mounted device may be a few years away.

Apple currently aims to release an augmented reality headset in 2022, followed by a "sleeker" pair of augmented reality glasses by 2023, according to The Information. The report claims the timeline was shared by Apple executives in an internal presentation to employees at Apple Park in October.

Interestingly, the meeting is said to have been large enough to fill the 1,000-plus seats at Steve Jobs Theater, suggesting that Apple may have a large team working on the project. The report claims the discussions were led by Apple's recently appointed AR/VR head Mike Rockwell, a former Dolby executive. 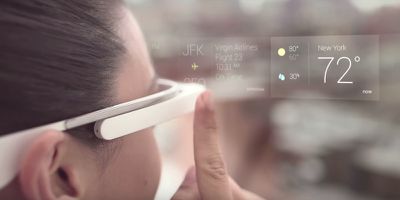 Google Glasses
The meeting is said to have reflected on some of the headset's planned features, including "3D scanning" and "advanced human detection."

The report claims Apple's headset will resemble Facebook's Oculus Quest virtual reality headset released earlier this year, but with a sleeker design, adding that Apple wants to "make heavy use of fabrics and lightweight materials" to ensure its headset is comfortable to wear for extended periods of time.

The headset is said to feature a high-resolution display and cameras that will allow users to "read small type" and "see other people standing in front of and behind virtual objects." During the meeting, Apple executives allegedly said the technology will be able to map the surfaces, edges, and dimensions of rooms with greater accuracy than existing devices on the market.

Apple executives said the company plans to reach out to third-party software developers as early as 2021 to encourage them to build apps for the device, so the headset could end up being previewed earlier than 2022.

The headset, allegedly codenamed N301, appears to be only one of Apple's ongoing AR/VR projects. The other is said to be a pair of AR glasses codenamed N421, with current prototypes said to resemble high-priced sunglasses with "thick frames that house the battery and chips." The final design could change.

rTHIS
This is stupid and useless
Score: 17 Votes (Like | Disagree)

This is stupid and useless

Mark this MR forum thread for future laughter in 2030.
Score: 10 Votes (Like | Disagree)

This will be huge

Human Detection, IE, massive privacy violation. Think WatchDogs.
Far better would be for vertical markets, such as assembly lines and such where as is already done on a more clunky scale in aircraft factories, illustrations could be projected in front of the user to help them position parts.
Score: 6 Votes (Like | Disagree)

thisisnotmyname
This will be huge
Score: 5 Votes (Like | Disagree)

itsmilo
I am guessing the sleeker designed one in 2023 will be the „Pro“ model for an additional 100 bucks
Score: 4 Votes (Like | Disagree)

Name a single professional use case for HUD via AR goggles. A single one. There no way this could be incorporated into any existing or future workflow. Not A/V, not any scientific/medical, not publishing.

Really? You can't think of anything even after taking into account artificial intelligence and machine learning? Not a single application? I can already think of 10 ideas in medical use alone.
Score: 3 Votes (Like | Disagree)
Read All Comments