Apple Launches Apple News+ in the UK and Australia

Apple News+, Apple’s subscription news and magazine service, has launched for users who live in the UK and Australia, Apple announced today.

‌Apple News‌+ subscribers can access more than 150 publications in ‌Apple News‌+, with a one month free trial available to test the service before having to pay the £9.99 (UK) or $14.99 (Australia) monthly fee. 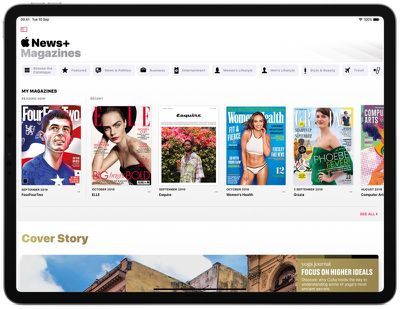 ‌Apple News‌+ has been available in the United States and Canada since March, and it is designed to present magazine and news content in a media rich format on iPhone and iPad. Apple said that ‌Apple News‌+ would come to the UK and Australia as part of iOS 13, though it is also available for those using iOS 12.2 or later and those using macOS 10.14.4 and later.

‌Apple News‌+ was built using Texture, a now-discontinued magazine subscription service that Apple purchased in 2018. It has thus far received some criticism for its formatting (not all publications support Apple’s media rich format) and for its confusing interface, though some improvements have been made since the U.S. launch.

For more on ‌Apple News‌+, make sure to check out our Apple News+ guide.

Most of their garbage can be found online for free.

masterleep
I really would like a news service like this, but Apple News+ is bad.
- the newspaper selection is very limited and not growing as far as I can tell.
- the reader is worse than a website in reader mode (for example, you can't zoom on article text).
- it's harder to find articles in the News interface than on a normal news website.
- links on the web or social media don't understand how to redirect into the News app, so you get stuck on the website / paywall anyhow.
Score: 5 Votes (Like | Disagree)

hmarold
Wow, this is bad... News Limited is the provider of content, so this makes Apple News just another Murdoch media outlet...

Those publications listed are the Australian tabloids, equivalent of Fox for our American friends. The worst of the worst when it comes to balanced and informative reporting.

Australia already has a problem with our democratic systems being overrun by a concentration of media in one company...
Score: 3 Votes (Like | Disagree)
Read All Comments