Bloomberg: 2019 iPhones Will Have Centered Apple Logo on Back

2019 iPhones will feature a centered Apple logo on the back of the devices, according to Bloomberg's Mark Gurman.

The centered logo will help users know where to place their Apple Watch or AirPods case to charge on the back of the upcoming iPhones, which are widely expected to have a new Qi-based device-to-device charging feature, similar to Wireless PowerShare on Samsung's latest Galaxy smartphones. 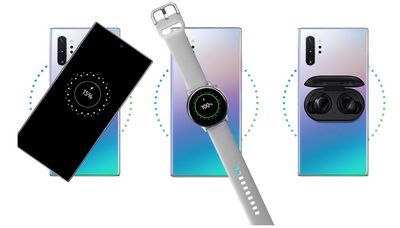 Wireless PowerShare on Samsung's Galaxy S10
In late July, an alleged Foxconn worker claimed that there will be no "iPhone" branding on the back of the iPhone 11 models, and this certainly seems more likely in light of this centered Apple logo rumor.

Taking both rumors into account, concept designer Ben Geskin has mocked up how the iPhone 11 models should look:

Gurman also reiterated that ‌iPhone 11‌ models will have more shatter-resistant glass and improved water resistance, the iPhone XR will come in a new green color, and that this year's Apple Watch refresh will be relatively minor, with a focus on new ceramic and titanium casing finishes and watchOS 6.

We're just three days away from Apple's event at Steve Jobs Theater, which kicks off Tuesday at 10 a.m. Pacific Time. Apple will be live streaming the event via its website, the Apple Events app on Apple TV, and YouTube. MacRumors will have full coverage of the announcements as they unfold — stay tuned!

“iPhone” brand is so strong. Why change it? I don’t get it.

Just like everything else, they’re dropping the iThis and iThat going with Apple-this. Never called it the iTV or the iWatch.
Removing everything related to Steve Jobs, iGuess.
Score: 20 Votes (Like | Disagree)

NufSaid
My credit card is at the ready take my money
Score: 18 Votes (Like | Disagree)

Pakaku
It might just be me, but the idea of placing a phone down on its screen makes me feel kind of uncomfortable
Score: 15 Votes (Like | Disagree)

scottlitch
… because they will be called Apple Phone.
Score: 12 Votes (Like | Disagree)

...for starters. Then once it's achieved parity with phones costing half as much, Apple can start working on new features.
Score: 11 Votes (Like | Disagree)

Mactendo
Until iPhones have better batteries this device-to-device charging will be mostly useless.
Score: 10 Votes (Like | Disagree)
Read All Comments

Wednesday August 17, 2022 9:51 am PDT by Juli Clover
Apple is aiming to hold its first fall event on Wednesday, September 7, reports Bloomberg's Mark Gurman. The event will focus on the iPhone 14 models and the Apple Watch Series 8. The standard iPhone 14 models are expected to get few changes, but the iPhone 14 Pro models will include updated camera technology, the removal of the notch in favor of a pill-shaped and hole-punch cutout, an A16...
Read Full Article • 227 comments