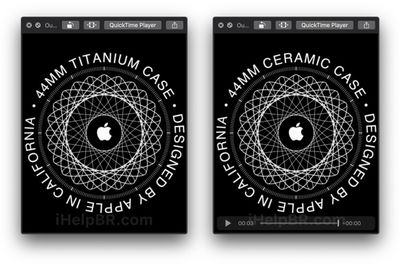 Discovered by iHelpBR, the assets belong to the initial Apple Watch setup screen animation, which resembles the rear design of the watch including the model type and the words "Designed by Apple in California."

Back in February, respected Apple analyst Ming-Chi Kuo predicted Apple would introduce a "new ceramic casing design" to its Apple Watch line-up, and these assets do appear to back up that claim.

Apple introduced "Edition" models with the Apple Watch Series 2 that were made from ceramic. Prices started at $1,299, which it continued offering when the Series 3 Apple Watches came out, but Apple discontinued the Edition models when the Series 4 launched last year.

Current Apple Watch models do have a ceramic back, but the assets indicate Apple will revisit a new high end ceramic model in 2019. And it looks like we can also expect an entirely new titanium model – a material perhaps currently in favor at Apple following work on its just-released titanium Apple Card.

‌Apple Watch Series 2‌ ceramic model in white
It's not clear if the titanium casing will replace stainless steel or become an additional option. Another unanswered question is whether these materials will be exclusive to a new Apple Watch Series 5, or also be offered as extra case material options for existing models.

According to the latest prediction from Kuo, Japan Display will supply the OLED displays for new Apple Watch Series 5 models slated to launch in the second half of 2019. Beyond that, we know very little about what to expect about the Series 5.

Apple is expected to unveil its new iPhone lineup on September 10, so it's likely these Apple Watch models will be unveiled during the same event.

H.E. Pennypacker
I never understood why someone would purchase a high end smart watch. High end watches like Rolex and omega are timeless, smart watches are not. Dropping $1300+ on a watch that will be obsolete in 2-3 years doesn’t seem like a great investment.
Score: 66 Votes (Like | Disagree)

Apple Knowledge Navigator
If Apple offered a service whereby the logic board could be replaced in the future (to retain speed if nothing else) I'm sure more people would part money for the stainless steel/ceramic models.

Heck, if they offered it from day one, then even the gold 'Edition' model would at least have some value...
Score: 40 Votes (Like | Disagree)

Haha! I’m assuming they mean with the heart-monitoring features and health applications to the devices.

But yeah, the point is that a Rolex in 50 years is still a timeless collectible, functioning Rolex. It will always have use and be worth something. In even 5 years that Apple Watch isn’t going to work as intended. It’s a throwaway. People spending the absurd amounts of cash on them are just wealthy culturally adapted brainwashed IMO. It’s a thing. Needing, craving status as some form of personal gratification and measurement of success. Those are the people spending $1300 on the throwaway Apple watches.
Score: 21 Votes (Like | Disagree)

I never understood why someone would purchase a high end smart watch. High end watches like Rolex and omega are timeless, smart watches are not. Dropping $1300+ on a watch that will be obsolete in 2-3 years doesn’t seem like a great investment.

That’s where you’re incorrect. Smart watches are _not_ an investment, it’s merely an aesthetic decision based on what someone prefers. Depending how long someone keeps the watch and being they want a specific casing material (i.e stainless, ceramic, ect), it pays for itself as long someone regularly uses it. I’d happily pay that, being I’m not interested in the aluminum Model. Some of us want the ‘higher end’ models. Choice is a good thing.

As long as someone can accept it depreciates, but enjoys the functionality and aesthetics, that’s really all that matters.
Score: 21 Votes (Like | Disagree)

So discontinuing ceramic then bringing it back is a “new feature”?

who said its a feature? is just a thing. Maybe people ask for ceramic to come back
Score: 19 Votes (Like | Disagree)

this year will be an easy skip for me with my s4 sport 40mm and one year left of AC+
Score: 19 Votes (Like | Disagree)
Read All Comments