Apple's 2019 iPhones are going to have a two-way wireless charging feature that will allow the iPhone to charge other devices like the AirPods, Apple analyst Ming-Chi Kuo again confirmed in a report sent out to investors today.

Kuo previously mentioned the feature briefly in a February note, and today he goes into a bit more depth about the suppliers who will benefit from the feature. 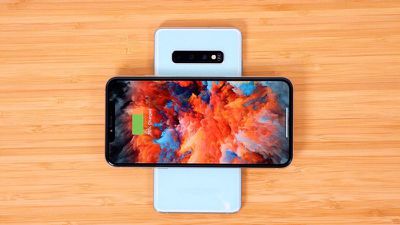 To accommodate two-way wireless charging, Kuo believes battery boards included in 2019 iPhones will increase in size, as will battery pack capacity. Kuo says that battery capacities for the 6.5-inch ‌iPhone‌ XS Max successor could increase by 10 to 15 percent, while the battery capacity of the 5.8-inch OLED ‌iPhone‌ XS successor could grow by 20 to 25 percent. The ‌iPhone‌ XR successor isn't expected to see much of a gain, though, with Kuo predicting growth of 0 to 5 percent.

ipedro
Let me propose a name for the feature: Since there are no wires and power goes through thin air...let’s call it... wait for it... “AirPower”. Brilliant huh?
Score: 39 Votes (Like | Disagree)

So what happens when you put 2 iPhone11's back to back?

It's the equivalent of crossing the streams. Never ever cross the streams!
Score: 14 Votes (Like | Disagree)

AngerDanger
There's just something wrong with that image.

Kaibelf
I wonder if they can work it to be a watch charger as well. That might be handy for travelers as the cable is a little annoying. Also, only some Qi chargers work with some series of the watches, so it's kind of a mess.
Score: 10 Votes (Like | Disagree)

Let me propose we stop posing the same story over and over again like we did with Airpower.

That was wrong, this is just a guess and we don't need to be told 8 times it's coming but from someone else. I think everyone is burned out from the results after airpower. Apple has a long way to go before regaining a lot of our confidence in things.

You are currently on a rumor site. They are going to post rumors.
Score: 9 Votes (Like | Disagree)
Read All Comments