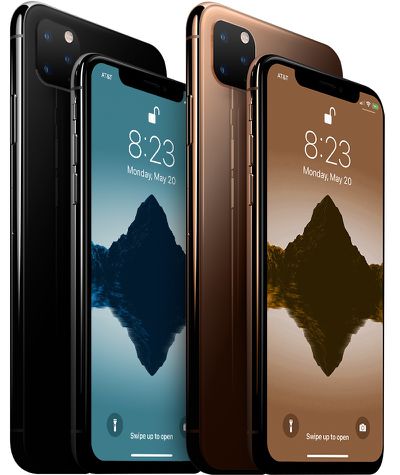 Starting with the iPhone, the report claims the widely rumored triple-lens rear camera system on the higher-end models will enable a larger field of view for capturing ultra-wide-angle photos and videos, in addition to improving low-light photos. New editing tools while recording video are also expected.

The high-end iPhones will look nearly identical to the current models from the front, but at least some colors on the back will have a new matte finish, according to the report. Interestingly, he adds that the new iPhones should better withstand drops due to an unspecified "new shatter-resistance technology."

The report claims a new multi-angle Face ID sensor that captures a wider field of view will enable users to unlock the next iPhones more easily, even when the devices are laying flat on a table for example.

Other features outlined for 2019 iPhones include "dramatically enhanced" water resistance and faster A13 processors with a new co-processor known internally as "AMX" or "matrix." As for the next iPhone XR, the report corroborates rumors of it gaining a dual-lens rear camera and a new green color option.

As for the iPad, the report claims both the 11-inch and 12.9-inch iPad Pro will be refreshed in 2019 with improved cameras and faster processors. The report also backs the rumor of a 10.2-inch iPad launching later this year.

Turning to the Apple Watch, this year's changes are said to be "more muted," revolving around watchOS 6 and new case finishes. Last week, iHelpBR's Filipe Espósito discovered new titanium and ceramic 40mm and 44mm Apple Watch models based on hidden assets in the watchOS 6 beta.

The report concludes that Apple plans to launch a new 16-inch MacBook Pro with slim bezels later this year, as well as new AirPods with water resistance and noise cancelation and a cheaper HomePod with reduced tweeters as early as 2020.

TechRunner
I still have hopes that Apple will price the new (base model) 16" MBP (if that's what they call it) in the realm where it's attainable by us mere mortals.
Score: 25 Votes (Like | Disagree)

johnyslats
I'm in for the Face ID improvements alone
Score: 22 Votes (Like | Disagree)

I still have hopes that Apple will price the new (base model) 16" MBP (if that's what they call it) in the realm where it's attainable by us mere mortals.

With the way Apple has been pricing things, make sure you don't hold your breath.
Score: 21 Votes (Like | Disagree)

MKevin3
even when the devices are laying flat on a table for example.

With the camera protrusion on the back I assume "laying flat" is never possible? ;)
Score: 14 Votes (Like | Disagree)

ipponrg
That’s great news though not biting for that alone.

Just watch the year after that they will allow horizontal iPhone Face ID. Pick and choose wisely when you want to “upgrade” with Apple
Score: 13 Votes (Like | Disagree)

I still have hopes that Apple will price the new (base model) 16" MBP (if that's what they call it) in the realm where it's attainable by us mere mortals.