Apple intends to launch a new iPhone for the budget-conscious Chinese market that features an under-display fingerprint sensor instead of expensive Face ID technology, Chinese media sources have claimed.

According to Sino-based English-language paper The Global Times, Apple will release the new "tailored ‌iPhone‌" in the country to arrest declining sales, which have been worsened by cost pressures from the 18-month long trade war between the U.S and China. 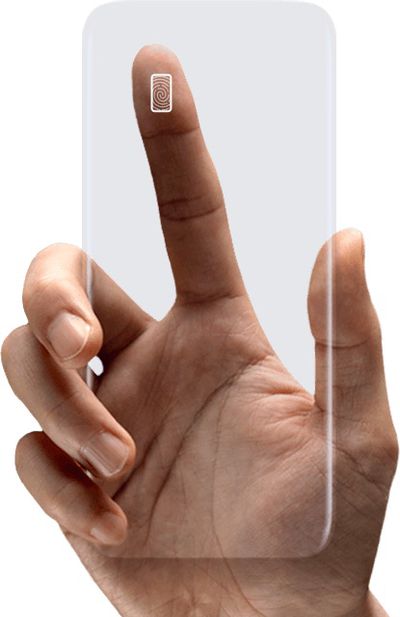 The new phone will reportedly remove Face ID, the facial recognition system for the iPhone, and instead employ an under-display fingerprint function, news site caijing.com.cn reported, citing sources on the upstream industry supply chain. An industry insider revealed that this is likely to "save on costs."

A structured light laser emitter, the major component of Face ID, would cost several hundred yuan, said a Beijing-based representative who preferred to be anonymous. He told the Global Times on Monday that "only Apple can afford it but that would also affect its sales."

Apple has effaced fingerprint recognition entirely in its flagship smartphone lineup, which includes the ‌iPhone‌ XS, ‌iPhone‌ XS Max, and LCD-based ‌iPhone‌ XR. All have a notch at the top of the screen housing the TrueDepth sensing camera in lieu of a Home button, which contained Touch ID's focused capacitive drive ring in earlier iPhones.

Apple was widely rumored to be attempting to integrate ‌Touch ID‌ under the display on 2017's ‌iPhone‌ X, but the company ditched any form of fingerprint scanning after hitting "early line of sight" with ‌Face ID‌. Chinese smartphone brands like Huawei, Xiaomi, Oppo and Vivo have since gone in the opposite direction and extended the adoption of in-display fingerprint sensing technology from their premium smartphones to mid-range models.

The increased use of fingerprint scanners in smartphone screens is also reportedly being driven by a reduction in sensor prices and the price gap between OLED and LCD panels. This strategy adopted by domestic brands appears to have paid off, with Apple losing many Chinese users who prefer smartphones priced at around 5,000 yuan ($731), which has resulted in an increase in purchases of local brands, according to Monday's report.

Despite the market shift to fingerprint sensing tech, many observers believe Apple is done with ‌Touch ID‌ in smartphones, although the company has explored various in-display fingerprint scanner solutions in the past, including fingerprint sensing MicroLED displays. ‌Touch ID‌ has also found a new lease of life on laptop keyboards, specifically in Apple's MacBook Pro with Touch Bar range and the latest MacBook Air.

Notably, following meetings with suppliers in Apple's Asian supply chain in May, Barclays analysts claimed that 2020 model iPhones will have acoustic fingerprint technology that could allow for full-screen ‌Touch ID‌.

Regardless, news of Apple's declining sales in China contrasts with the company's most recent earnings results. CEO Tim Cook said in April that performance in China had improved over the previous quarter, thanks in part to a sales tax cut in the country that allowed Apple to decrease the price of its products, and a "much better tone" in the China-U.S. trade relationship.

Rojo
I want this instead of FaceID
Score: 150 Votes (Like | Disagree)

one more
Apple intends to launch a new iPhone for the budget-conscious Chinese market that features an under-display fingerprint sensor instead of expensive Face ID technology, Chinese media sources have claimed.

How about “the budget-conscious” European market too? I am in! :)
Score: 62 Votes (Like | Disagree)

Quu
Can we get that in the USA and Europe too please?
Score: 46 Votes (Like | Disagree)

maerz001
I’m sure it would sell worldwide much better than China only
Score: 38 Votes (Like | Disagree)

Rogifan
Yeah I call BS on this one.
Score: 24 Votes (Like | Disagree)

Moonjumper
I like Touch ID. I'd be happy to see this.
Score: 18 Votes (Like | Disagree)
Read All Comments