The U.S. Patent and Trademark Office today granted Apple a patent that describes a display capable of reading a user's fingerprint without a dedicated Touch ID sensor (via AppleInsider). The patent is interesting given current rumors swirling around the iPhone 8, which is expected to do away with the home button and integrate Touch ID directly into the display, but perhaps more noteworthy is the patent IP's re-assignment from LuxVue, a little-known company acquired by Apple in 2014 that developed low-power microLED-based displays. 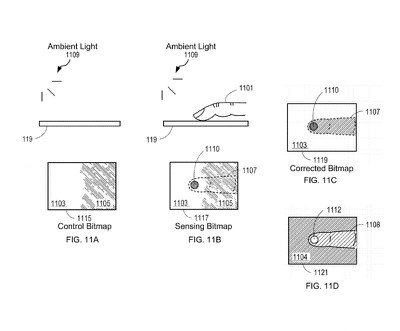 Titled "Interactive display panel with IR diodes", the patent details a touch display that uses specifically microLED-sensing technology, rather than the traditional active matrix hardware utilized by most consumer smartphones and tablets.

The technology replaces larger capacitive sensors with smaller infrared light emitters and sensors, which sit alongside the RGB LED display substrate or on a microchip mounted to the substrate. These "interactive pixel" formations can then be calibrated to perform any number of functions, including ambient light sensing, proximity detection, and notably complex touch detection, which works by bouncing infrared light off a user's finger and back to the sensing diodes.

In the latter operation, specific rows – or a whole portion of the display – scan for a user's finger, which generates a proximate positioning bitmap to inform the system of the target's location and immediate surround. Bitmaps can include data like the intensity of incoming light, enabling a deeper analysis of the object and its surface curvature – dark and bright spots corresponding to the ridges and grooves of a fingerprint, for example.

The patent describes a couple of embodiments for the technology, including a microLED display with a higher density of interactive pixels in certain areas of the screen, such as where a virtual home button may be located. Alternatively, said pixels may ramify throughout the display in sufficient number as to make fingerprint identification on any portion of the screen a possibility.

Apple has explored other systems for enhancing display fingerprint recognition in the past. As with all patents though, the standard qualification applies: Apple may deem the LuxVue invention surplus to its upcoming product requirements. However, on its own, the system goes to show that reliable fingerprint identification does not necessarily rest on Touch ID alone. With rumors suggesting Apple may incorporate iris scanning into the iPhone 8, the security implications of dropping Touch ID's focused capacitive drive ring altogether may not be so great after all.

Sounds like it could be used in :apple: Watch, too.

i agree. likely even before the iphone. this way they can test it in a smaller scale and a smaller display should be easier to produce too.
Score: 4 Votes (Like | Disagree)

Sirious
If Apple does so something like this in the next iPhone, does that mean it's the end of screen protectors?
Score: 4 Votes (Like | Disagree)

RightMACatU
Can't seem to put my finger on this... but I like it :D
Score: 3 Votes (Like | Disagree)

Appleaker
I was hoping for a microLED rumor. I'm looking forward to seeing these in IOS devices and Macs but unfortunately Apple is likely putting them in the Apple Watch first.
Score: 3 Votes (Like | Disagree)

Has nothing to do with bravery, but market conditions, and they'll still sell by the million as history has taught us this.

There is no premium hardware/software/ecosystem that offers real competition to the iPhone, until that happens we're stuck with iterative updates. Something from MS is the only option really (Google aren't interested in quality over quantity and nobody else has deep enough pockets). After burning fingers in the mobile hardware arena before I cannot see them throwing the billions required to become a genuine contender at such a project. It's a shame, because most of the pieces are there app ecosystem aside.

That's what I recall. Such improvement that it is selling at record numbers. If Apple could do that level of improvement every year, it would be amazing.

Looks like they will be continuing it with a bunch more iterative updates with the next iPhone, e.g., maybe new scanner, improved screen, better battery, more powerful chip, faster charging. Sounds familiar doesn't it. Indeed, that's all Apple has ever done with the iPhone, i.e., put out "iterative" updates. That's why they've sold over a billion of these devices.

I always ask the same serious question that goes unanswered: "What would a non-iterative update look like?" Circular versus rectangular? Produce holograms? Inquiring minds want to know.
Score: 2 Votes (Like | Disagree)

orbital~debris
Sounds like it could be used in :apple: Watch, too.

It could also help make that device more independent from iPhone (i.e. this Touch ID variant could be set up independently, to allow payments for Apple Pay, without having to inherit details from an iOS device).
Score: 2 Votes (Like | Disagree)
Read All Comments

Tuesday July 14, 2020 10:57 am PDT by Juli Clover
Apple's upcoming iPhone 12 models could ship with a new Lightning to USB-C cable that includes a braided fabric design, according to leaked photos from ChargerLAB that surfaced on Weibo today (via Twitter users DuanRui and L0vetodream). The photos depict a USB-C to Lightning cable that has a braided design rather than the standard non-fabric design of the current cables. Apple has never...
Read Full Article • 164 comments

Tuesday July 14, 2020 1:54 am PDT by Tim Hardwick
Apple could be working towards the release of a new app for Windows 10, according to a report this week from an Italian website. The blog Aggiornamenti Lumia suggests that an app from Apple is "coming soon" to the Microsoft Store, but stops short of providing additional details. Apple still maintains a Windows version of the iTunes app, which has been discontinued on Mac and replaced by...
Read Full Article • 69 comments