Apple has urged the Trump administration not to proceed with tariffs of up to 25 percent on a fourth set of goods imported from China, which would impact nearly all of its products, including the iPhone, iPad, Mac, Apple Watch, Apple TV, AirPods, Beats, HomePod, batteries, repair parts, and more. 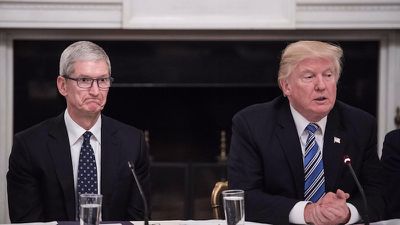 In a letter sent to United States Trade Representative Robert Lighthizer [PDF] this week, Apple warned that the tariffs would reduce the company's contributions to the U.S. economy and weigh on its global competitiveness:

U.S. tariffs on Apple's products would result in a reduction of Apple's U.S. economic contribution.

U.S. tariffs would also weigh on Apple's global competitiveness. The Chinese producers we compete with in global markets do not have a significant presence in the U.S. market, and so would not be impacted by U.S. tariffs. Neither would our other major non-U.S. competitors. A U.S. tariff would, therefore, tilt the playing field in favor of our global competitors.

We urge you not to proceed with these tariffs. Thank you for your consideration of our comments.

Apple outlined many of its economic contributions in the letter, referring to itself as a "proud U.S. company" that is both the largest corporate taxpayer and one of the largest job creators in the country:

Apple is a proud U.S. company and one of the largest job creators in the United States. We are responsible for over 2 million jobs across all 50 states, including Apple's direct employees, employees at our manufacturing and retail partners, and Americans who make their living in the vibrant and growing app economy.

In 2018, after the passage of tax reform in the U.S., we announced our intention to make a total direct contribution to the U.S. economy of over $350 billion over 5 years and we are pleased to report that we are on track to achieve this contribution. We are opening several new sites and adding new jobs to our U.S. employee base.

Apple is also the largest U.S. corporate taxpayer to the U.S. Treasury and pays billions more each year in local property, sales, and employee taxes.

Last month, analysts at investment bank J.P. Morgan estimated that the tariffs could result in a 14 percent increase in the retail price of an iPhone XS, pushing the cost of the device from $999 to $1,142. However, the company could also choose to absorb the impact of the tariffs on a temporary basis.

The letter was earlier reported by CNBC.

Apple has another option... They could decide to assemble or manufacture here in the U.S.A. Yes, I realize that their labor expense would go up, after all, we do not allow people to work for a few dollars a day, in horrible conditions, but they would have less in tariffs. Made in the U.S.A. used to mean something. I remember when I was proud that the Mac Pro was being assembled in Texas.

Just about everything you stated is false, and the reason for that is you really have no idea what it takes to manufacture an iPhone, nor the sheer scale of such manufacturing operations.

There aren't 1.5 million people in the entire US who have the skills and the desire to assemble electronics for a living, and certainly not in the approximately 5 million who are currently unemployed.

To attract and train that many workers you would need to raise the price of an iPhone to at least double what it costs today. Even if Apple was willing to do that, there would be no point since no one would buy a $3,000 phone when they could buy the Samsung equivalent for $1,500.

This nonsense is spewed by self-proclaimed "patriots" who know nothing about economics. The fact is that forcing Apple to manufacture phones in the US is not good for America, but it is a boon for its non-American competitors.
Score: 50 Votes (Like | Disagree)

Southern Dad
Apple has another option... They could decide to assemble or manufacture here in the U.S.A. Yes, I realize that their labor expense would go up, after all, we do not allow people to work for a few dollars a day, in horrible conditions, but they would have less in tariffs. Made in the U.S.A. used to mean something. I remember when I was proud that the Mac Pro was being assembled in Texas.
Score: 50 Votes (Like | Disagree)

What apple fail to realize is that trump’s tarifs are GOOD for apple, not bad!

How do you figure that?
Score: 42 Votes (Like | Disagree)

NickName99
This whole tariff thing is one of the stupidest things Trump has done in office, other than obstructing justice to the point that he’ll immediately be indicted once he’s no longer in office.

Hopefully he stops monkeying around with the economy like this before driving us into a recession.
Score: 37 Votes (Like | Disagree)

Sedulous
Good. Force China to play the the same rules as everyone else. Trump is an arrogant jerk but this is something that needed to be done 20 years ago.
Score: 35 Votes (Like | Disagree)
Read All Comments

Sunday June 26, 2022 2:52 pm PDT by Joe Rossignol
Following the launch of Apple's new 13-inch MacBook Pro with the M2 chip, it has been discovered that the $1,299 base model with 256GB of storage has significantly slower SSD read/write speeds compared to the equivalent previous-generation model. YouTube channels such as Max Tech and Created Tech tested the 256GB model with Blackmagic's Disk Speed Test app and found that the SSD's read and...
Read Full Article • 384 comments