2020 iPhones May Have Full-Screen Touch ID, New iPhone SE Based on iPhone 8 Also Possible Next Year

Barclays analyst Blayne Curtis and his associates today shared their expectations for both 2019 and 2020 model iPhones following their trip to Asia earlier this month, where they met with some suppliers within Apple's supply chain. 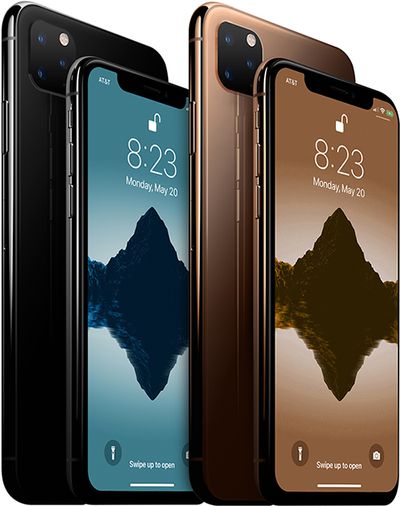 MacRumors render of 2019 iPhones with triple-lens rear cameras
Our summary of the research note, shared with MacRumors:

Other rumors have suggested that 2019 iPhones will feature frosted glass casing, larger batteries, and a bilateral charging feature that allows users to charge AirPods or an Apple Watch by placing them on the back of the ‌iPhone‌.

Apple will likely unveil its latest iPhones in September as usual at Steve Jobs Theater.

ondert
These rumors have mixed up so much. Apple doesn't return to Touch ID after saying Face ID is thousands times more secure.
Score: 50 Votes (Like | Disagree)

nwcs
If there is another iPhone SE it should be “small edition” and not the cheap-out version. In other words, a modern iPhone designed to be smaller. If Apple would just make an iPhone that fits the physical size of the current SE but with the X style treatment I would buy it immediately.
Score: 50 Votes (Like | Disagree)

strategicthinke
Do these people really believe that Apple will walk back on Face ID? After going with it on the iPads, the company has given more than enough evidence that it is fully invested in it. Never mind the fact that once you use Face ID you realize how much superior it is to Touch ID.
Score: 49 Votes (Like | Disagree)

Never mind the fact that once you use Face ID you realize how much superior it is to Touch ID.

I beg to differ. I am often having to do multiple swipes/attempts to get a successful authentication. TouchID worked much better for me and my use cases with near 0 re-attempts.
Score: 37 Votes (Like | Disagree)

mattopotamus
We don't want a damn iPhone 8 SE! We want a small phone!!!!!
Score: 34 Votes (Like | Disagree)
Read All Comments