One of the more contentious iPhone 8 rumors we've seen recently is the claim that with the removal of the Home button, Apple will ditch its Touch ID fingerprint recognition technology and replace it with another form of bio-recognition hardware.

While several possible alternatives have been put forward – such as iris scanning, facial recognition, and even a combination of technologies – each has its pros and cons, while it's still far from clear how Apple would implement them in a purportedly bezel-free OLED handset.

On the other hand, it's possible that Apple plans to retain a fingerprint identification system in the context of a wider technology which doesn't rely on Touch ID as it is currently understood. A new Apple patent application published on Thursday and discovered by AppleInsider offers a case in point. 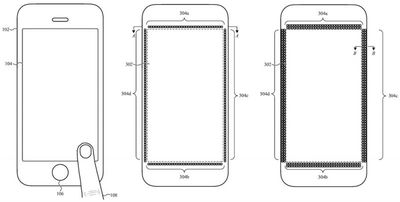 The patent is called "Acoustic imaging system architecture" and describes a method by which a conventional capacitive sensor like Touch ID is replaced by an array of acoustic transducers laid out beneath an iPhone display or in its protective housing.

Some embodiments describe the transducers as capable of generating acoustic waves, or pulses, which propagate through different substrates, including an iPhone's coverglass. A sensing mode then monitors reflections, attenuations, and diffractions in the sound waves caused by a foreign body – such as a finger – coming into contact with the responsive substrate.

According to the filing, the ridges in a fingerprint create an identifiable acoustic impedance mismatch. The resulting scan data is transmitted as electric signals which subsequently inform an onboard image resolver to enable it to create a two-dimensional map of the surface. Similar to existing biometric security technology, the digital map is then compared against a database to authenticate the user.

Crucially, the system is capable of being configured to scan for particular body parts like a user's ear or a skin pattern, in order to determine how the device is being held. Depending on the implementation, the acoustic imaging system might also replace an iPhone's proximity sensors.

Additionally, the design of the acoustic system allows it to be installed almost anywhere in a device chassis, including directly under the display, around the screen's perimeter or bezel, around buttons and in other, non-input areas like a rear chassis.

It's not known if the system just described will find its way into an upcoming iPhone, but the patent suggests Apple may be working on sensor technology capable of various feats, with fingerprint identification being just one of them.

Alternatively, one could envision a scenario in which Apple considers its implementation of fingerprint recognition different enough to warrant a subtle re-definition of Touch ID – as when "Force Touch" on the MacBook became "3D Touch" on the iPhone, for instance. Indeed, at this early stage in the iPhone 8 rumor mill, uncertainty surrounding the future of Touch ID could be down to misconstrued information or confusion over a semantic quibble.

Just drop it, Bough! Headphone jack will be a non-issue in a few years' time when everybody else drops it too. Apple lead and the rest follow, as per.
Score: 14 Votes (Like | Disagree)

If Apple had to remove the headphone jack from the 7 series iPhone because of space issues how pray-tell are they going to fit all this cool new tech into the same form factor? Or was the space issue just BS?

They removed the jack in order to make space for new things like this.
Score: 8 Votes (Like | Disagree)

They removed the jack in order to make space for new things like this.

So there was no need to remove from the 7 series then
Score: 8 Votes (Like | Disagree)

sofila
I don't see Touch ID going anywhere. It will change position form or technology but it will be there. Any other kind of user recognition tech will be a complementary ADD-ON, not a replacement
Score: 7 Votes (Like | Disagree)

Oh there were reasons.

The 7 was a small update from the 6S, so they tested going jackless on this model rather than take the gamble on the model with the biggest overhaul to date

Internal space freed up was used for a larger taptic engine
Score: 5 Votes (Like | Disagree)
Read All Comments