The Wall Street Journal has outlined its expectations for Apple's media event tomorrow at Steve Jobs Theater, where the company is expected to introduce subscription-based services for movies and TV shows, magazines and newspapers, and possibly games. The keynote begins Monday at 10 a.m. Pacific Time. 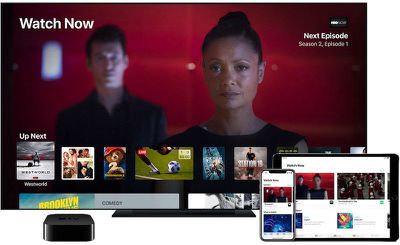 As we've heard previously, the report claims Apple plans to unveil the first footage from some of its new original TV shows at the event. Hollywood stars such as actress Reese Witherspoon and director J.J. Abrams have been invited to attend.

The report claims Apple plans to charge a fee for its original content, despite some sources previously saying it would be free to Apple device owners.

Apple's revamped TV app will make it easier to subscribe to networks such as Starz, Showtime and HBO, with which Apple has been "negotiating to offer their shows to users for $9.99 a month each." It's unclear if that means each network will cost $9.99 per month or if each user will pay $9.99 per month total.

Apple is said to be negotiating to bring its new TV app to multiple platforms, including Roku and smart TVs. This could refer to an expansion of the new iTunes movies and TV shows app coming to Samsung's latest smart TVs to other leading TV brands such as Sony and LG and to cheaper brands such as TCL and Sharp via Roku.

Samsung, LG, Sony, and Vizio already announced that their latest smart TVs are gaining AirPlay 2 support, enabling users to stream video, audio, photos, and other content directly from an iPhone, iPad, or Mac to the big screen. Apple and Roku are also in advanced discussions about AirPlay 2 support.

Apple is also expected to unveil a revamped News app with an optional premium tier that provides access to more than 200 magazines, including Bon Appétit, People, and Glamour, as well as newspapers such as The Wall Street Journal. The report claims Apple plans to charge $9.99 per month for the service.

The revamped Apple News app is expected to be based on Texture, the magazine subscription service that Apple acquired last year. The report claims The Washington Post and The New York Times are not participating in the service at launch due to disagreements over Apple's alleged 50-50 revenue split.

The report goes on to mention how Apple CEO Tim Cook began holding monthly meetings with Apple's services division around late 2017 as the company aims to grow its revenue from existing subscription offerings such as Apple Music and iCloud storage.

These meetings are said to include "monitoring of apps that benefit and threaten Apple":

For Mr. Cook's monthly services meetings, the company has intensified monitoring of apps that benefit and threaten Apple. The team has created a release radar for the CEO to track apps that are expected to sell well and other metrics for the apps that have challenged Apple's business, including iTunes sales decreases compared with Apple Music subscription growth…

Apple's video and news subscription offerings will certainly help the company expand its service portfolio further, but its exact plans are still clouded in secrecy. In less than 24 hours, we'll have a better understanding.

Apple will provide a livestream of the event.

The things that would benefit Apple would be:
- an optimized, less confusing GUI
- stable software
- great hardware (including for pros)

The things that would threaten Apple are:
- a portfolio that is too big to handle
- buggy software
- little innovation
- bad customer service

None of the premium services have shows worth $10 a month - especially Starz.

HBO has a great back catalog and many popular shows that are still airing. Maybe they just don't have shows you like.
Score: 31 Votes (Like | Disagree)

Oh good! Tim, I can help. This is for your next briefing:

The things that would benefit Apple would be:
- an optimized, less confusing GUI
- stable software
- great hardware (including for pros)

The things that would threaten Apple are:
- a portfolio that is too big to handle
- buggy software
- little innovation
- bad customer service

What does any of this crap have to do with tomorrow’s keynote?
Score: 20 Votes (Like | Disagree)

Eddy Cue is now the most important and influential person at Apple and a cert to be the next CEO.

Eddy Cue always walks on stage like he just teleported from a Las Vegas casino and is surprised to be where he is but rolls with it. I hope he's not the next CEO and they get someone more tech-minded.

Maybe Scott Forstall will come back and save the company. If only it needed saving . . . they have too much money to appeal to the people they won over when Steve Jobs first came back. Apple was at its best when it was on the ropes. They had an infusion of amazing software by acquiring NeXT. Now I can't even get Disk Utility to work and I prefer pretty much every third party app compared to Apple's equivalent offering.
Score: 16 Votes (Like | Disagree)

What does any of this crap have to do with tomorrow’s keynote?

I guess the question should rather be: What does tomorrow's event have to do with a company that used to be known for building professional computer equipment? Somewhere, something went terribly wrong in Cupertino.

Soon, the Apple data centers will host a myriad of Windows PCs for their streaming service for games.
The rest of the servers will be busy streaming video content to their consumption devices: AppleTV, iPad and iPhone.
The Mac will only remain for the few people who write software for those iOS gadgets.

Kiss your "professional" Mac equipment goodbye, because it has lost all relevance for this "new" media corporation.
Score: 14 Votes (Like | Disagree)
Read All Comments