A few days ago, Apple announced that AirPlay 2–enabled smart TVs are coming soon from leading manufacturers, and we've since seen a series of announcements from Samsung, LG, Sony, and Vizio at CES 2019. 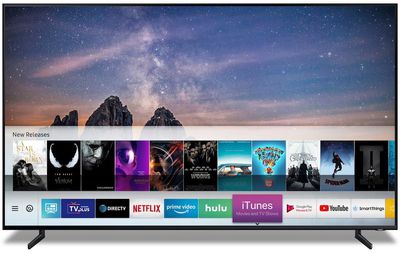 Apple has now shared a list of AirPlay 2–enabled TVs announced to date:

We've yet to see any AirPlay 2 announcements from smaller brands such as TCL, Hisense, Panasonic, or Toshiba.

Samsung announced that its latest smart TVs are also getting an exclusive iTunes TV and movie app for accessing the storefront.

Apple is widely expected to launch a Netflix-esque streaming video service later this year, and AirPlay 2 support on leading smart TVs would make it easier for users to stream Apple's original content on the big screen without an Apple TV. Rumors suggest Apple could introduce the service within the first half of 2019.

Shedding a collective tear for all those folks (myself included) that purchased a non-supported TV within the last few years.

Why? Apple TV is still the best way to experience and consume your content on the biggest screen in your home.
Score: 17 Votes (Like | Disagree)

ELman
I just wish you could purchase a decent "dumb" TV that doesn't have an operating system. I have a 2017 LG OLED and I use my Apple TV for everything. The OS on the TV is just another thing that needs updating if the vendor actually updates it. I would much rather update the Apple TV every 3-4 yrs. and have the latest OS and security updates.
Score: 12 Votes (Like | Disagree)

Cryates
Shedding a collective tear for all those folks (myself included) that purchased a non-supported TV within the last few years.
Score: 11 Votes (Like | Disagree)

Enclavean
Props to Vizio for supporting all the way to 2017
Score: 7 Votes (Like | Disagree)

Why? Apple TV is still the best way to experience and consume your content on the biggest screen in your home.

I don't disagree, because I own an Apple TV 4K, but AirPlay access directly to the TV would still be beneficial. Most average consumers also don't want to shell out an additional $150-200 for the Apple TV if the option was available on the TV itself.
Score: 6 Votes (Like | Disagree)
Read All Comments