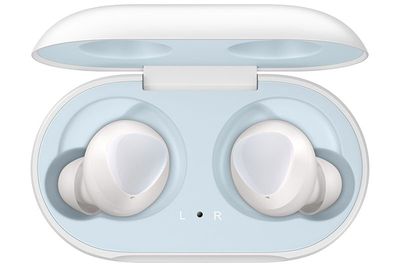 The Galaxy Buds are Samsung's new wire-free earbuds, similar to the AirPods. Samsung focused on sound with the Galaxy Buds, partnering with AKG. An Enhanced Ambient Sound feature allows users to better hear their surroundings with the earbuds in the ears, and an Adaptive Dual Microphone provides clear voice in loud and quiet environments alike.

Samsung says the Galaxy Buds are 30 percent smaller and lighter than the previous-generation earbuds, making them Samsung's most compact wearable earbuds yet. The battery in the Galaxy Buds supports 5 hours of calls or six hours of music on one charge.

There's a wireless charging case that's used to charge the Galaxy Buds, and it can be charged using any Qi-based wireless charger. It can also be charged via a Galaxy S10 smartphone using the new wireless PowerShare feature.


Samsung's Galaxy Buds come in three colors -- white, yellow, and black -- and will be available for purchase on March 8. The Galaxy Buds will be priced at $129.99, but customers who pre-order a Galaxy S10 or S10+ can get a free pair of Galaxy Buds.

The Galaxy Fit is a thin, lightweight wearable that's made for activity tracking. It features automatic workout tracking, heart rate monitoring, built-in alerts and messages, data like weather, calendar, and alarms from your smartphone, and more.

The Galaxy Watch Active will be available starting on March 8 for $200, while the Galaxy Fit is coming in the second quarter of 2019.

asdavis10
There's no such thing as an AirPods competitor.
Score: 48 Votes (Like | Disagree)

Damtoft
They look much better than the Airpods!
Score: 38 Votes (Like | Disagree)

It will be no surprise when the battery in these gives out after two years.

Well that'll be nearly twice as long as my AirPods managed.
Score: 32 Votes (Like | Disagree)

bigboyz12000
Wake me when Samsung actually designs something on their own..you know before Apple does it right. Until then i'll be napping Zzz thank you.
Score: 25 Votes (Like | Disagree)

penajmz
They want to be Apple so bad, and it shows.
Score: 25 Votes (Like | Disagree)

fokmik
even the setup process they 1:1 copy paste it
Score: 23 Votes (Like | Disagree)
Read All Comments