At an "Unpacked" event in San Francisco, California, Samsung today unveiled its 2019 device lineup, with a range of smartphones that will be competing with Apple's 2018 and 2019 devices.

Samsung's biggest announcement was the impressive Galaxy Fold, that can transform from a 4.6-inch smartphone to a 7.3-inch tablet for $1,980, but Samsung also had a whole line of other smartphones, including the Galaxy S10 and S10+. 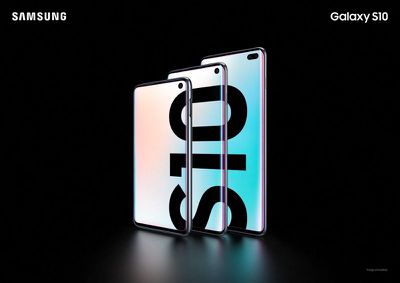 Both devices use an "Infinity-O" display with smaller camera cutouts. The 6.1-inch Galaxy S10 has a super small hole punch cutout at the top of the display for the 10-megapixel camera, while the 6.4-inch Galaxy S10+, which has two cameras (8 and 10 megapixels) and an RGB depth sensor for adjusting depth of field, has a slightly larger oval-shaped cutout.

The display maxes out at 1,200 nits of brightness, which beats the iPhone, and it offers 60 million colors at 100 percent accuracy. It supports HDR10+ and cuts down on blue light by 44 percent for more comfortable viewing.

Underneath the display of the S10 and S10+ is an ultrasonic fingerprint scanner for biometric security. Samsung says that because it uses ultrasonic technology, it works well in bright light and in wet conditions. Samsung is using "vault-like security" for more protection.

The new smartphones come in different glass finishes, and there's also a premium ceramic option in black or white.

There's a triple-rear camera system in the S10 smartphones, with a 12-megapixel wide-angle lens, a 12-megapixel telephoto lens, and a 16-megapixel ultra-wide 120 degree lens for wider-angle landscape shots. It's able to record video in HDR10+ and features advanced stabilization.

Along with the Galaxy S10 and S10+, Samsung is introducing two other smartphones that are lower and higher-end. The Galaxy S10e, a lower-cost device that sounds like an ‌iPhone‌ XR competitor, features a 5.8-inch display and a $750 price tag. It features just two rear cameras and a 3,100mAh battery.

On the high end, Samsung debuted the Galaxy S10 5G, a smartphone that features a 6.7-inch display, 5G connectivity, and all of the other bells and whistles of the S10 lineup. It features 256GB of storage and a 10-megapixel front-facing camera with a 3D depth sensor, and instead of three rear cameras, it has four: a telephoto, a wide-angle, an ultra wide-angle, and a 3D Depth camera.

Samsung will accept pre-orders for the Galaxy S10e, S10, and S10+ starting on February 21, with the smartphones set to launch on March 8. The higher-end Galaxy S10 5G will launch in the second quarter of 2019, with pricing not yet announced.

Klae17
Thank you Samsung, for helping us out by making Apple innovate. Without the necessary evil, Apple would still be pushing 16 gb phones.
Score: 82 Votes (Like | Disagree)

Imory
Not too shabby Samsung. In fact, not bad at all. Don't think I'll ever tolerate the software, but the hardware seems impeccable.
Score: 75 Votes (Like | Disagree)

Glideslope
Screw Face ID. Well done Samsung. If it were not for the OS I’d be sooo done with iPhone. :apple:
Score: 53 Votes (Like | Disagree)

JamieLannister
Phil Schiller on stage in 2019...

Phil: "it takes so much courage to introduce to you the new iPhone XI. iPHone with the same UI, same battery life, same notch, same cameras, same 5w charger included, same wireless charging speeds, same screen size, same no headphone jack, same bezels, A13 processor that can take 10 trillion pictures a second and give you the same 12mp image but with better colors. All for $1599. Oh, and we have one last thing. Dookie brown color."

Compare this S10 series to any iPhone old and new, it makes apple look like they are stuck in the past - actually not look like but they are.
Score: 45 Votes (Like | Disagree)

I thought this was MacRumors. Must have bookmarked the wrong site.

If you did, you did so a while ago; MacRumors has been reporting on Apple's competitors' releases for years. Here are some Samsung articles from 2011:

Samsung is especially relevant given the sordid and litigious history they have with Apple.