Monday February 18, 2019 4:03 am PST by MacRumors Staff
A few weeks ago, Apple's Group FaceTime was discovered to have a major security flaw which potentially allowed users to listen in on others without their permission. The flaw was quickly publicized forcing Apple to shut down FaceTime servers temporarily while a patch was being created. A week later, Apple released iOS 12.1.4 which addressed the security issue and re-enabled Group FaceTime for those users. 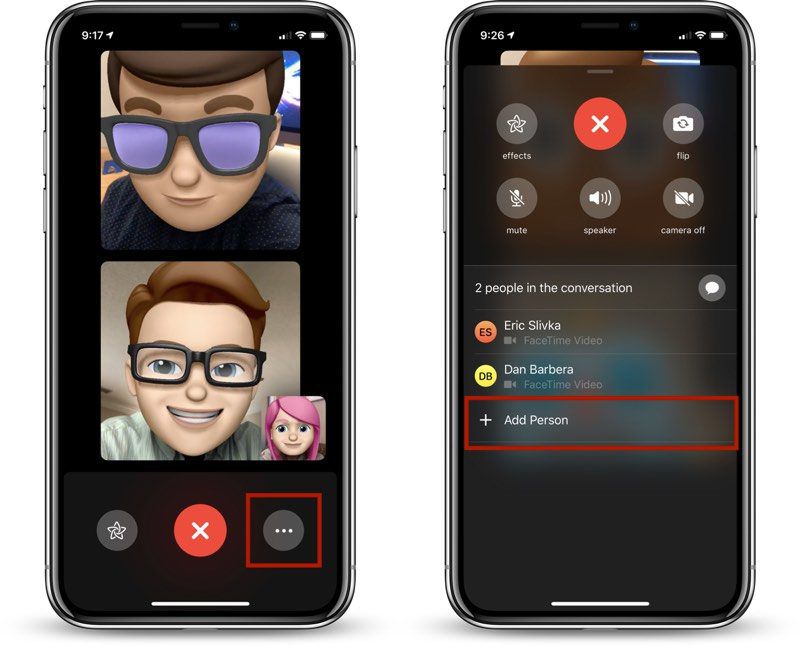 Unfortunately, Group FaceTime even under iOS 12.1.4 hasn't quite been restored to its former functionality. A MacRumors forum thread started the day after 12.1.4's release revealed users who found themselves unable to add more users to a FaceTime call. As it turns out, it appears that users are no longer able to add a person to a one-on-one FaceTime call. The "Add Person" button remains greyed out and inactive in this situation. The only way to add another person to a Group FaceTime call at this time is to start the call with at least two other people. This slight distinction appears to be the source of confusion for many users.

MacRumors forum user Bob-K persisted in his support calls with Apple, and was finally told that the "Add Person" button not working in that situation was a known issue and that they didn't know when it would be fixed.

Apple Support on Twitter also appears to be aware of this restriction:

That's good. Also, note that Group FaceTime calls need to be started with at least two additional users in the FaceTime app. Meet us in DM if you're still having an issue with more users: https://t.co/GDrqU22YpT


We were able to reproduce this issue, but it appears this workaround isn't entirely reliable as one user reported being unable to consistently add people even during a group call. A search of Twitter shows a number of users who believe that Group FaceTime remains disabled, though some users may simply be unaware of the iOS 12.1.4 update, or may be confused by the greyed "Add Person" button issue.

Apple is actively working on iOS 12.2 Beta which has not yet seen the addition of the patch for Group FaceTime, but we'd expect them to address the ongoing bugs in a later 12.2 beta release.

So, you don’t know what the problem is, nor how to solve it but you estimate that it can be done in a week? Have you considered a career in Sales and Marketing.
Rating: 11 Votes

You'd think with that week or close to they could've fixed it entirely...

Maybe they need more help. It sounds like you have some technical skills that they need. I’m sure they would be happy to bring you on board.
Rating: 9 Votes

That's the price people are paying for an overblown "security" flaw: a set of circumstances so rare they would be almost impossible to achieve deliberately and, once known, can easily be defeated. Now other people are paying the price by not being able to use a feature they rely on. I don't blame Apple for CYA, but I do blame the hew and cry and clutching of pearls by Twitter commenters and the tech press. Save the outrage for something important, or it becomes even more meaningless.


You really didn’t get the problem, did you?

A feature, enabled on most iOS devices, enabled a caller to spy on the users audio and when they denied the call enabled video instead. Easily defeated? The user, yes. The problem? Only by disabling Facetime altogether.

I blame people like you for playing down things to a degree that made Apple continue its ignorant security and quality approach for the last few years.
[doublepost=1550499898][/doublepost]

Maybe they need more help. It sounds like you have some technical skills that they need. I’m sure they would be happy to bring you on board.


Hm, maybe they need more help with their HR. It seems you have skills they need.

I’m sure your easy-going attitude towards their technical problems is a plus.
Rating: 4 Votes

w5jck
Perhaps this is a good opportunity for all the young brats to learn about true socializing--do it in person and not through emojies over the internet! :rolleyes:
Rating: 3 Votes

Software development takes how long it takes. There's no way for us to know how difficult a problem this was to solve, and it may have come with some regression risks. Bottom-line: we can't judge, unless we're on their development team.
Rating: 3 Votes

Naraxus
Can Apple do anything right these days?
Rating: 3 Votes

MoreRumors?
When Apple comes out with a new update to fix this issue, Tim will tell you guys Group Facetime will be the best ever.
Rating: 2 Votes

Based on nothing but speculation?

Love when people say they have “no knowledge” but then choose to drop knowledge like they have it.
Rating: 2 Votes