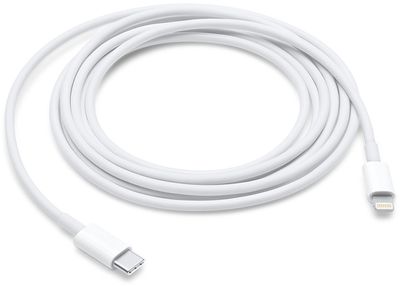 Last week, Apple informed members of its Made for iPhone or "MFi" licensing program that Lightning to USB-C cables for charging and syncing are now permitted to be manufactured. These cables require a new Lightning connector with part number C94, which Made for iPhone program members can now order.

Apple is selling the new Lightning connector to eligible hardware manufacturers for $2.88 per, and it is estimated to ship in six weeks, according to documentation shared with MacRumors by Hong Kong website ChargerLab.

This means that third-party accessory makers enrolled in the Made for iPhone program, such as Anker, Aukey, Belkin, and Incipio, should have the part necessary to create MFi-certified Lightning to USB-C cables by mid-January and, allowing time for production, could be available to purchase by February or March.

A Lightning to USB-C cable is required to fast charge the iPhone 8 and newer with an 18W-plus power adapter. Otherwise, the new C94 connector is expected to provide a maximum of 15W of power with a standard power adapter.

Apple is currently the only retailer of certified Lightning to USB-C cables at a cost of $19 for the one-meter option and $35 for two-meters in the United States. The one-meter cable was originally $25, but it received a price cut in November 2016 alongside some of Apple's other USB-C adapters and cables.

The biggest advantage to third-party Lightning to USB-C cables is that many will likely be significantly less expensive than Apple's own, while still meeting Apple performance standards under the Made for iPhone program. Many third-party options will likely have more durable designs too, such as a braided cable.

Apple first informed its Made for iPhone program members about its plans to allow third-party Lightning to USB-C cables earlier this year.

BeyondtheTech
Just in time for the next year's iPhone to be USB-C...
Score: 22 Votes (Like | Disagree)

compete12
So, let me get this straight...
MacBook Pros have solely used USB-C ports for the last 2 years and you still need a dongle for these new $1000 iPhones because they ship with the old USB cable?
Apple makes me want to turn everything off and go to a beach.
Score: 21 Votes (Like | Disagree)

Always love the tough talkin' can't stand the heat get out of the kitchen philosophy. If enough people complain about planned obsolescence, and it becomes a well known talking point that will affect sales, Apple will change.... Eventually.

In the meantime, get back on that saddle and hang on cowboy. More dongles are a comin'.

Sometimes this helps me deal with Apple:

Old MacDONGLE had a farm
E-I-E-I-O

With a dongle here
And a dongle there

Old MacDonGLE had a farm
E-I-E-I-O

Try it, it's good therapy, but if you cannot get the song out of your head, don't blame me, blame the (Mac)dongles.
Score: 9 Votes (Like | Disagree)

synergize
Apple is a master at planned obsolescence, this provides them a continuous income stream. If you want to use Apple products you pay the price or you move on.
Score: 5 Votes (Like | Disagree)
Read All Comments

Friday August 12, 2022 12:46 pm PDT by Juli Clover
Samsung this week launched its fourth-generation foldable devices, the $1,000 Galaxy Z Flip and the $1,800 Galaxy Z Fold. Though there's no sign of a comparable Apple foldable device on the horizon, rumors suggest prototypes are in the works, so we thought we'd take a look at Samsung's newest smartphones to see what Apple needs to measure up to when a foldable iPhone does come out. Subscribe ...
Read Full Article • 314 comments