Unlike Costco, Walmart Has 'No Plans' to Accept Apple Pay

Costco, the world's second largest retailer behind Walmart, recently confirmed that it now accepts Apple Pay and other contactless payment methods at all of its 527 warehouse locations in the United States. 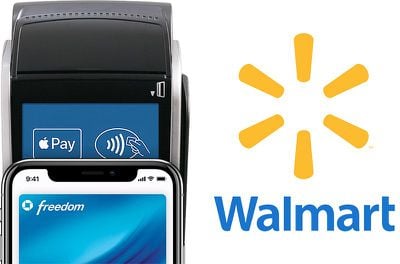 Walmart appears to be unfazed by the move, however, as it remains committed to its own Walmart Pay platform in the United States.

"Walmart Pay is the exclusive form of mobile payment accepted at Walmart and we have no plans for that to change," said Walmart spokesperson Erin Hulliberger, in a statement provided to MacRumors today.

Walmart Pay, built into the Walmart app for iOS and Android, works at any checkout lane with any major credit, debit, pre-paid, or Walmart gift card. To use it, a customer must tap on Walmart Pay and scan the QR code displayed at the checkout. An electronic receipt is automatically sent to the app.


Walmart was originally committed to the Merchant Customer Exchange consortium and its payments solution CurrentC, which was later postponed indefinitely, before launching Walmart Pay in 2015. As of July 2016, Walmart has rolled out Walmart Pay to some 4,600 of its locations in all 50 states.

In late 2015, Walmart's senior vice president of services Daniel Eckert said Walmart Pay allows "for integration of other mobile wallets in the future," which provided hope that the big-box chain may eventually accept Apple Pay and other contactless payments, but nearly three years later, that has yet to happen.

Last year, rival big-box chain Target likewise said it had "no plans" to make Apple Pay available in its stores, despite accepting it as a payment method in its app. Instead, Target launched a barcode-based solution.

Apple Pay launched in the United States in October 2014, providing tap-to-pay functionality with a compatible iPhone or Apple Watch after setting up a supported credit or debit card in the Wallet app. Apple Pay is now available in more than 20 countries, and is set to launch in Germany later this year.

Correction: Costco has 527 warehouses in the United States, and 758 worldwide, as of August 2018.

fs454
And I have "no plans" to ever walk into a Wal Mart on principle of them holding back the advancement of a consumer-friendly tech.

PaulSorensen
Unlike CostCo, I don't plan to buy anything at Walmart.
Score: 40 Votes (Like | Disagree)

Scottsoapbox
Look out superior people that *don't shop at Walmart*!

That condescension looks good on you. Really.
Score: 40 Votes (Like | Disagree)

MagMan1979
Good, cause I have exactly ZERO plans to shop at a dumpster store, which tends to attract the lowest common denominator of humanity thru its doors!
Score: 30 Votes (Like | Disagree)

Look out superior people that *don't shop at Walmart*!

That condescension looks good on you. Really.

Ever seen what a Wal-Mart does to surrounding local businesses in the Midwest? I worked at Wal-Mart for one of my first jobs in a Midwestern state for $5.40/hr in the TLE department (2005). How anyone is supposed to afford anything at that income level is beyond me. But it shuts down a ton of local businesses in a 50+ mile radius. Here in CA I don't think it has the same effect but I've never been a big fan of Wal-Mart, and that's coming from an ex-employee. Hardly condescension and superior imo.
Score: 19 Votes (Like | Disagree)

macduke
Conveniently, I have no plans to shop at Walmart, lol. My favorite thing about being in my 30s is that I finally make enough money to avoid Walmart and not feel bad about it. Hy-Vee doesn't take Apple Pay either but we order our groceries online and they show up at our house for free. To me that is worth paying a little more for the cost of groceries!
Score: 16 Votes (Like | Disagree)
Read All Comments

Wednesday August 17, 2022 9:51 am PDT by Juli Clover
Apple is aiming to hold its first fall event on Wednesday, September 7, reports Bloomberg's Mark Gurman. The event will focus on the iPhone 14 models and the Apple Watch Series 8. The standard iPhone 14 models are expected to get few changes, but the iPhone 14 Pro models will include updated camera technology, the removal of the notch in favor of a pill-shaped and hole-punch cutout, an A16...
Read Full Article • 237 comments