Apple Pay is now accepted at all Costco warehouses in the United States, at in-store checkouts, according to the wholesale retailer. 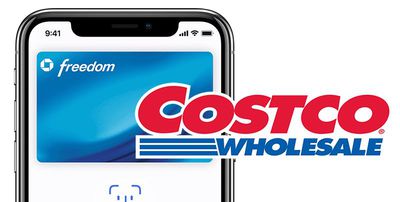 Costco had previously been trialing Apple Pay at a warehouse in Issaquah, Washington, near its corporate headquarters, and a handful of other locations, but only now has acceptance rolled out to all of its stores.

The tap-to-pay functionality of Costco Anywhere credit cards is also working now. Costco launched this Visa-branded card a few years ago, in partnership with Citi, enabling Costco members to earn 2% cash back on purchases from Costco and Costco.com. It also doubles as a Costco membership card for entry.

As one of the biggest retailers in the United States, Apple Pay acceptance at Costco was long awaited. Apple Pay will also be launching at pharmacy chain CVS and convenience store chain 7-Eleven in the U.S. later this year.

Update: Costco says it completed its contactless payments rollout in the United States on August 10, excluding its gas stations.

Unity451
Waiting for the day that I can use my phone to actually walk into a Costco instead of having to carry another card around in my wallet.
Score: 26 Votes (Like | Disagree)

Still have to drag the stupid membership card along to the checkouts! How dumb, if I use Apple Pay, it should also send my membership information! OR the Costco app should accomplish this AUTOMATICALLY!

Walgreen's App does something similar. When you hold it near the terminal, the membership card pops up. One click to enter and then another click to pay. Really smooth. Wish more stores did that.
Score: 8 Votes (Like | Disagree)

liberte1776
Still have to drag the stupid membership card along to the checkouts! How dumb, if I use Apple Pay, it should also send my membership information! OR the Costco app should accomplish this AUTOMATICALLY!

When I pay at the pump I can use my Costco credit card swiped ONCE, when I go in the store I have to do so TWICE: once to show membership, and a second time to pay -- same if I use Apple Pay. :( What a DUMB customer experience!

At my CostCo, they only accept Visa. I have a Mastercard I'd prefer to use and it is setup in Apple Pay. Does that now mean that Costco will accept my Mastercard if used via ApplePay? Or can they limit to Apply Pay only using Visa cards on the back end?

I just paid for gas at Costco yesterday. You need to swipe the membership card first, then use Apple Pay.

They have Apple Pay at your Costco's gas pumps too, not just cashiers?
[doublepost=1534801029][/doublepost]

I never understand these MacRumours articles about stores in America accepting Apple Pay. It's up to the banks, and once they're on board, your contactless debit/credit card is on your phone... Then you just tap your phone instead of your card when you pay at a store? Why does the store get a say in the US? Is it a competition thing like Samsung pays some chain not to take Apple or something? But even still, the contactless payment terminals don't know the difference do they?

(Genuinely asking as I'm sure the answer is probably really obvious and I'm just misunderstanding something, please be gentle in reply!)

It is because if a store will not accept Apple Pay, then they can see the card number instead of a meaningless single-use token. It allows them to track your stream of purchases day-after-day and which things you buy repeatedly. If a store permits use of Apple Pay, then they lose the ability to track your purchases, which you should love if you enjoy privacy.
Score: 5 Votes (Like | Disagree)

vailMike
I love the convenience of Apple Pay so was pleasantly surprised when I was able to use it earlier this week. If Costco somehow would allow you into the club w/o physically having the membership card, then I think this whole solution would be perfect. There were many times in the past when I wanted to go shopping but couldn't because I didn't have the membership card with me. I now have the Costco Credit Card and it's my primary card (there are some great perks) so I almost always have access to the store now.
Score: 5 Votes (Like | Disagree)
Read All Comments