Apple is close to securing a deal for the rights to turn 1980s fantasy movie "Time Bandits" into a TV series, reports Deadline.

Directed by Terry Gilliam, "Time Bandits" featured the story of an imaginative 11-year-old boy, Kevin, who gets sucked into a fantastical adventure with a band of dwarves during the Napoleonic Wars in Italy.


Kevin and the dwarves travel through time using a magical map, visiting places like ancient Greece and the Titanic and fighting off an evil being intent on stealing the map for his own purposes. 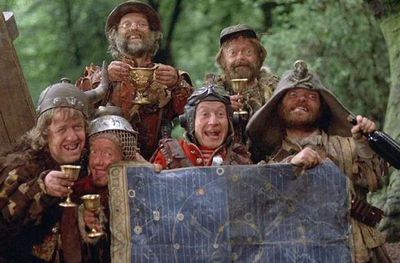 According to Deadline, the new TV series based on the movie will be a co-production between Anonymous Content, Paramount Television, and Media Rights Capital. Gilliam is set to serve as a non-writing executive producer.

If Apple secures the rights to the "Time Bandits" TV spinoff, it will join the other more than a dozen television shows Apple has in the works, which span genres from drama to comedy to shows for children.

In other related news, comedy writer Regina Hicks has signed on to be a co-showrunner for Apple's upcoming animated television show "Central Park" alongside Loren Bouchard and Josh Gad.

Breaking Good
I saw Time Bandits in the theater when it was released. I very much enjoyed the movie, but it does not need to be remade. It certainly should not be remade into TV series.

It was an endearing movie, but very much a one-shot deal.
Score: 14 Votes (Like | Disagree)

Next thing they’re going to ruin is The Goonies.

How is making a spin-off TV series ruining a movie that already exists?
Score: 9 Votes (Like | Disagree)

Shees relax and enjoy the ride

I'm relaxed. There's simply nothing to "enjoy" from a cynical money-grab.
Score: 8 Votes (Like | Disagree)

It is the (edit to change middle to first) first segment of Terry Gilliam's "Three Ages of Man" trilogy, consisting of Time Bandits, Brazil, and The Adventures Of Baron Munchausen

That's just an affectation on Gilliam's part. It's not a "trilogy" in the sense of a three part connected narrative. Additionally, since Gilliam is an executive producer on this TV series, apparently he disagrees with you on the integrity of this so-called "trilogy" being violated. Since he's the one who labeled it a "trilogy" in the first place, that's his right.
[doublepost=1532727305][/doublepost]

Yes, I understand that, as part of the deal, they are going to pull all the DVD copies of the original film and deface them with spray paint. They will be ruined, absolutely. But, Terry Gilliam is behind this, so I think it his right to do with his artistic creation as he will.
Score: 7 Votes (Like | Disagree)
Read All Comments

Friday May 27, 2022 2:15 pm PDT by Juli Clover
There's just over a week to go until the 2022 Worldwide Developers Conference, which is one of the biggest Apple events of the year. We've heard surprisingly little about iOS 16 this year, so we're in for some major surprises when June 6 rolls around. As we wait for the keynote event, we thought we'd share some iOS 16 wishlist items from MacRumors readers, because who knows? We just might...
Read Full Article • 239 comments