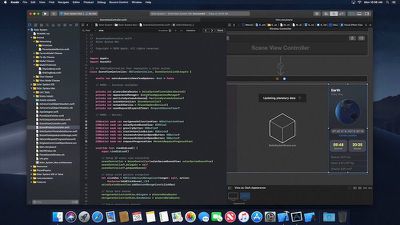 The well-known developer says he found the 30-second clip buried within an API on the backend of the Mac App Store. He shared a direct link to the video, embedded below, with 9to5Mac's Guilherme Rambo.


Given the video originates from Apple's servers, and is for its own Xcode development tool, everything shown is very likely real.

The video itself also likely confirms rumors that the Mac App Store will be redesigned on macOS 10.14 to more closely resemble the App Store on iOS 11, including the addition of preview videos like this one for apps.

The leak comes just two days before Apple's annual Worldwide Developers Conference, where the company is expected to preview macOS 10.14 alongside iOS 12, watchOS 5, and tvOS 12. WWDC opens with a keynote on Monday at 10:00 a.m. Pacific Time at the McEnery Convention Center in San Jose, California.

MacRumors will be in attendance at the keynote, with live coverage of the event beginning shortly after 8:00 a.m. Pacific Time. Stay tuned to MacRumors.com and our @MacRumorsLive account on Twitter.

maflynn
I may be in the minority, but I'm not a huge fan of the dark mode. I see it all over the place, so its certainly a popular theme
Score: 60 Votes (Like | Disagree)

cmaier
I don’t understand the allure of dark mode, but if it makes everyone else shut up about dark mode I’m all for it
Score: 34 Votes (Like | Disagree)

DocMultimedia
An actual leak! Dark mode is certainly what the younger crowd likes. And tiny fonts.

_Refurbished_
My excitement for WWDC has reached my a new level.