YouTube recently began rolling out support for high dynamic range video content on iPhone X, as noted by users on the MacRumors forums and Reddit. HDR videos provide a broader range of colors and luminance compared to sub-HDR content, and the format also supports quality video playback on a wide variety of screen sizes.

For iOS users, YouTube videos in HDR can be viewed on the iPhone X, but the feature does not yet appear to be working on the latest iPad Pro models. YouTube has many HDR-supported videos on its site, with dedicated channels like The HDR Channel providing videos for you to watch in HDR on iOS. To make sure of the quality of playback find a video to play, then tap anywhere on the video itself, tap the three dots in the top right-hand corner of the screen, tap "Quality," and then make sure it reads 1080p60 HDR. 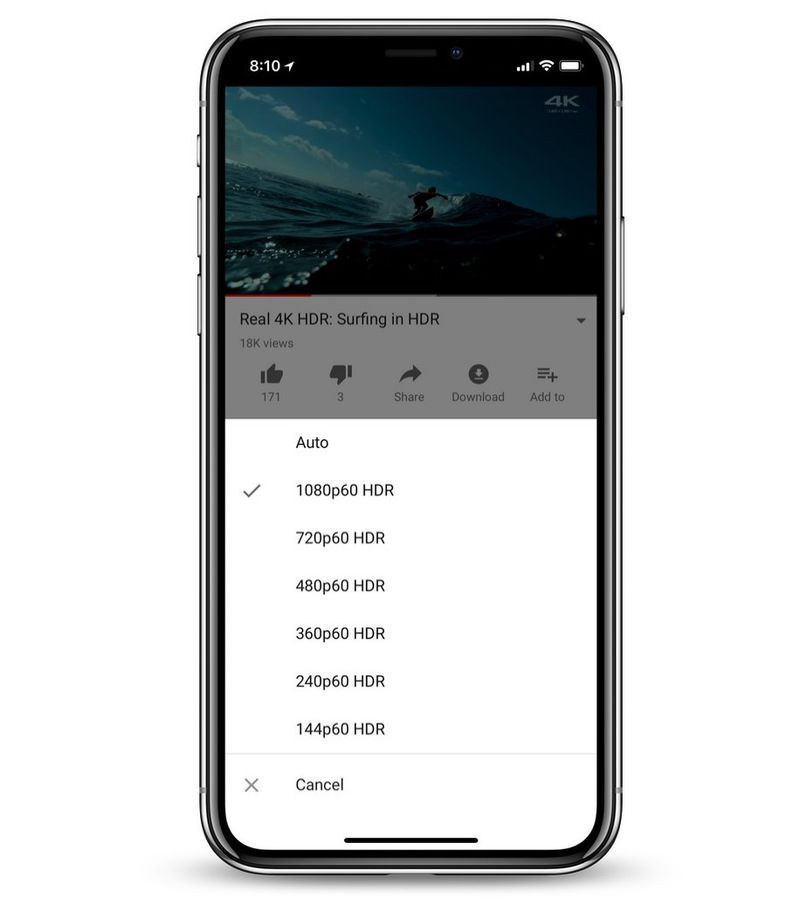 Apple debuted HDR support last year with the "Super Retina" display in the iPhone X, which became the first HDR OLED display incorporated into one of Apple's smartphones. Apple also lists the iPhone 8 and iPhone 8 Plus as supporting HDR, but the displays for these devices are not the same as the Super Retina display on iPhone X, so any HDR content played on the 8 or 8 Plus isn't true HDR.

On the iTunes Movies Store on Apple TV 4K, select films also support 4K, HDR10, and Dolby Vision when paired with compatible 4K television sets. Although YouTube recently updated its Apple TV app and listed a few videos as "4K," the app still has yet to support true 4K. When viewing details about a video, maximum available resolution is still listed as 1920 x 1080, while 4K resolution is 3840 x 2160.

adamjackson
I bought an AppleTV 4K to watch YouTube in 4K...still having to use the NVIDIA Shield for 4K video. I wish Apple and YouTube would come to an agreement on video codecs.
Rating: 6 Votes

Delorean2006
I actually posted about this almost 2 weeks ago in the forums, happy it’s finally made it to the front page.
Rating: 4 Votes

I wonder if there will ever be 4K YouTube on the ATV.

Would this be Apple's fault or YouTube's fault?

Well, I am pretty sure it is YouTube's fault for updating the tvOS app with that horrible UI. My YouTube usage has decreased a lot because of the app.

google wants to use their own codec VP9, but apple does not support that codec.

but since VP9 is royalty-free i'd say apple is at fault. you can't expect google to have every video saved in another format just for apple devices...
Rating: 2 Votes

MacRumors should be RE-named "MacRumors for Dummies" !
Rating: 2 Votes

twistedpixel8
About time! Only been 3/4 of a year!!

Edit: Wow. It’s like looking through a crystal clear window. I’m actually speechless that this quality is possible on a phone.
Rating: 1 Votes

Considering that YouTube favors license free VP9 for 8K/4K HDR which Apple doesn't support it's most likely just H264 HDR since it's capped at 1080p.

Wonder what the obstacle is with adopting VP9? Is Apple being cheap saving a few pennies from the extra die space or arrogant? Even the cheap $40 Android TV boxes coming out with Amlogic S905D2 and S905X2 SoCs support H264, H265, VP9 and upcoming open standard AVS2 codec.
Rating: 1 Votes

Nozuka
If anyone else would like for apple to include the VP9 codec into iOS, please fill out this form. Thanks ;)

Just watched the same video as the original article on my iPhone X. Wow! Looks brilliant!

Subscribed to the channel. Some of the stuff on there is simply stunning
Rating: 1 Votes
[ Read All Comments ]