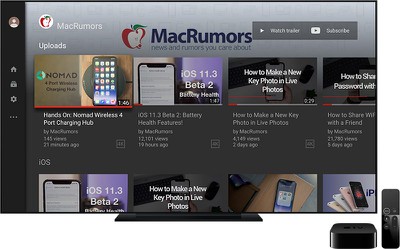 Rather than a single navigation bar at the top that links to sections like Search, Home, and Subscriptions, there's a new universal search bar that's easier to access along with dedicated categories like Recommended, Entertainment, Food, Music, Gaming, Technology, Comedy, and more, which makes it easier to find new content relevant to your interests.

A navigation bar on the left side of the screen provides access to your subscriptions, library, and viewing history, and there's a new, more detailed settings section.

While today's update lists 4K videos as "4K" in the video app, it does not appear that YouTube is supporting 4K content on the Apple TV at this time. When viewing details about a video, maximum available resolution is still listed as 1920 x 1080.

The new YouTube app for Apple TV is available now, and it can be installed by going to the YouTube app in the App Store and choosing "update" if it does not update automatically.

More like Apple still hasn't enabled 4k for YouTube since they refuse to support the royalty free VP9 codec, supporting only HEVC since they make money liscening it out to streaming services. Yet another example of the Apple Tax hard at work.

It's actually more a case of Google insisting on using VP9, when pretty much every other platform supports and uses h.264 (including Apple).

Google is expecting Apple to support an entirely new codec that doesn't have hardware decoding support in many chipsets. (VP9)

Apple is just expecting Google to use a codec that everybody else uses and has support on pretty much all hardware out there. (h.26x)

Google is the stubborn one here.
Score: 19 Votes (Like | Disagree)

MagMan1979
And once again, Google shafts us with the fugly Material Design BS!!! If I wanted that garbage interface, I'd have gotten an Android smartphone or streamer box!!! FFS

Well Google does own YouTube. Apple didn’t make this app.

And yet, when Apple designs it's apps for the Android platform, it's respectful enough to port their designs and use the platform's native UI/UX, and not force iOS UI/UX on Android. And most reputable app developers will make their apps use the UI/UX native to the target app platform.

benji888
Anything's got to be an improvement!
Score: 10 Votes (Like | Disagree)

itsmilo
That UI looks very .... dated? Like something you would find on an old Nokia Symbian player but maybe its also the dark content in those samples distracting
Score: 9 Votes (Like | Disagree)
Read All Comments