Apple has placed an order for a 10-episode half-hour comedy show starring Kristen Wiig, reports Variety. The show is said to be based on the upcoming "You Think It, I'll Say It" short story collection by Curtis Sittenfeld.

Curtis Sittenfeld's book features 10 stories that "upend assumptions about class, relationships, and gender roles in a nation that feels both adrift and viscerally divided," according to its description on Amazon. It was created by Colleen McGuinness, who worked on "30 Rock," "Mercy," and "About a Boy." 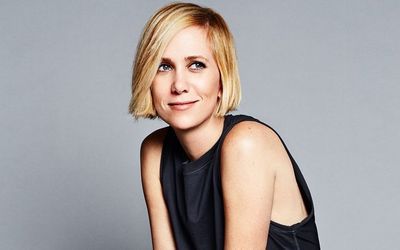 Image via Esquire
The television show will be Wiig's first regular role since leaving "Saturday Night Live" in 2012. Over the course of the last few years, Wiig has focused heavily on movies, starring in "Bridesmaids," "The Martian," and "Ghostbusters."

Wiig will serve as an executive producer on the comedy alongside Reese Witherspoon and Lauren Neustadter, with author Sittenfeld serving as a consulting producer.

The new Kristen Wiig comedy is the third show Apple is working on alongside Reese Witherspoon and her Hello Sunshine company. Witherspoon herself will star in an upcoming morning show drama alongside Jennifer Aniston, and she's also executive producing "Are You Sleeping," a psychological thriller starring Octavia Spencer.

Other TV shows in the works at Apple include Steven Spielberg sci-fi series "Amazing Stories," an untitled space drama developed by Ronald D. Moore, known for "Battlestar Galactica," "Home," a docuseries that will look at extraordinary houses, and "See," an epic world-building drama set in the future.

Apple is also said to be in a bidding war for a new sci-fi drama series penned by J.J. Abrams.

Nicksd84
I liked Apple better when they did what they did well and partnered with companies that filled in their gaps. Unfortunately the landscape has changed and it’s every man for themselves. We shall see if this pays off with good content. I haven’t been excited with anything just yet.
Score: 10 Votes (Like | Disagree)

Aluminum213
and next, a reality show on hipster coffee shops...
Score: 9 Votes (Like | Disagree)

NinjaHERO
It's going to be interesting to see all of these shows Apple is developing. But, there are so many different ecosystems already, I'm wondering what the tipping point will be. I'd prefer not having to subscribe to a dozen different networks in the future. I wonder if all of these things will just start to bundle and put us right back at the current cable package type set up we have now. Interesting to watch it all unfold.
Score: 5 Votes (Like | Disagree)

ROFL..no one is going to pay for Apple streaming service to watch SJW nonsense. Timmy is delusional.
Score: 4 Votes (Like | Disagree)
Read All Comments