The iOS 11.0.1 update can be downloaded to all eligible devices over-the-air in the Settings app. To access the update, go to Settings --> General --> Software Update. 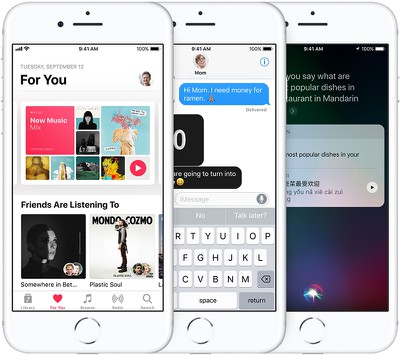 Today's update addresses several minor bugs that have been discovered following the release of the iOS 11 golden master. According to Apple's release notes the update includes bug fixes for iPhone and iPad.

iOS 11 is a major update to the iOS operating system with a redesigned Lock screen experience, a new customizable Control Center, a new Siri voice, a redesigned App Store, and an overhauled interface for the iPad. For more info on all the new features in iOS 11, check out our iOS 11 roundup.

Update: As noted by Ars Technica, iOS 11.0.1 appears to fix an Exchange e-mail server bug that prevented many users from sending email from Outlook, Office 365, and Exchange Server email accounts. In a support document covering the feature, Apple now says customers can fix the issue by updating to iOS 11.0.1.

LordQ
An update to an update in a week, Android users can't relate.

ManUtd08
Is it wishful thinking to hope that it fixes the horrible battery life issues?
Score: 37 Votes (Like | Disagree)

penajmz
Not showing up for me, iPhone 7 Plus
Score: 17 Votes (Like | Disagree)

Mlrollin91
Huge update size via OTA, hopefully thats a sign of many fixes and improvements.
Score: 15 Votes (Like | Disagree)

A patch this fast is also a sign of a rushed os11 software release /poor QA...

No, it's just continued improvement over the past few weeks. Heaven forbid they continue to work on the OS for the rest of the year, and parts of next year.
Score: 13 Votes (Like | Disagree)

Is it wishful thinking to hope that it fixes the horrible battery life issues?

No kidding. Since upgrading my 6S to iOS 11, my battery percentage sometimes looks more like a countdown timer.
Score: 12 Votes (Like | Disagree)
Read All Comments