We're six days away from Apple's iPhone 8 reveal event, set to be the first major product unveiling taking place at Apple Park, in the new Steve Jobs Theater auditorium. To get fans ready, Bloomberg today posted a detailed look into the internals of the Steve Jobs Theater, highlighting a few well-known facts while also sharing new tidbits of information about the building that's dedicated in memory of the late Apple CEO Steve Jobs.

The theater is built on a piece of high ground, allowing its occupants to catch a wide view of Apple Park from inside its glass walls, as well as hiding the building's four underground stories. The media will enter through the glass-encased lobby, and will be able to descend down two curved staircases into the main auditorium. However, two custom-made rotating elevators will also shuttle occupants into the lower sections and back up again after the event. 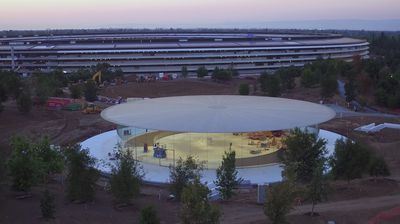 It also boasts two custom-made rotating elevators, which turn as they ascend and descend so that passengers enter and exit by the same door even as they go in and out from different directions. So far, so Apple—the more elegant single door, with its complex engineering, preferred to the more obvious double-door solution.

Down in the auditorium, the 1,000-occupant capacity theater holds as many leather seats, and earlier reports estimated each to cost around $14,000. In these seats, onlookers will get to watch the unveiling of the iPhone 8, iPhone 7s, iPhone 7s Plus, Apple Watch Series 3, and more next Tuesday, September 12, and afterwards more architectural "surprises" will be presented to Steve Jobs Theater attendees as they leave the auditorium.

Steve Jobs Theater floor plan via the City of Cupertino
One section of the theater's wall space near the entranceway of the building is said to "obscure a hollow space below the floating saucer." This way, upon entry attendees won't see what's behind the wall, but as the event ends and they walk back towards the surface, a product demonstration room will be revealed with all of the just-announced devices available for the first hands-on coverage.


Once CEO Tim Cook and his cohorts finish showing off the new iPhones, Apple Watch and TV onstage, a surprise will await the departing attendees. An inside wall, which obscures a hollow space below the floating saucer, will retract to reveal the product demonstration room, according to someone with knowledge of the design. For fellow Brits: think the Thunderbird 3 launchpad underneath Tracy Island's circular pool house.

Last night the latest Apple Park drone video was shared by Duncan Sinfield, providing a clear glimpse into the Steve Jobs Theater as people moved around inside the building and sat nearby on benches outside of the lobby. The lobby itself is a 20-foot tall glass cylinder that overlooks the main campus building and is surrounded by landscaping, also boasting the world's largest freestanding carbon fiber roof.

So they spent 14 million on just the seats?

No. They did not.
The MacRumors article is misleading.
The bloomberg article got it right (if you read carefully):
"Given the theater's 1,000-person capacity, one engineer said back in March that the building's budget meant each leather seat had cost Apple the equivalent of $14,000 apiece."

Because every evil genius has to have a secret underground lair. :)

I'm surprised there isn't an underground walkway behind the stage that goes back to the main building, so that the executives can go to and from without passing through the audience.

Heating and cooling is much cheaper when it's underground. Better for keeping out unwanted sounds from nearby roads (even though all the trees would stop most of the noise). And it's much more apples style to just have a minimal entry lobby visible to the outside rather than a huge theater. Those are my guesses.
Score: 6 Votes (Like | Disagree)

morcutt11
$14,000 seats? Really? I'd ask if that is really necessary for the limited use that they will see, but then again rotating elevators in place of double-door elevators isn't really necessary either.
Score: 6 Votes (Like | Disagree)
Read All Comments