Apple today sent out media invites for its annual iPhone-centric event that will be held on Tuesday, September 12 at 10:00 a.m. at the Steve Jobs Theater at the company's new Apple Park campus in Cupertino, California. The media invites offer a first look at the theme of the event and feature the tagline: "Let's meet at our place." (via The Loop) 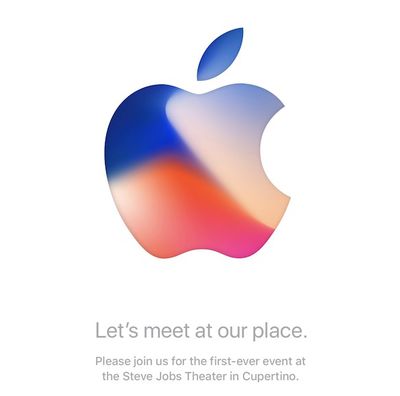 Apple's fall 2017 event will be its most significant in years thanks to the debut of a radically redesigned iPhone that features an edge-to-edge display, a vertical rear camera, facial recognition capabilities, a much improved processor, and wireless inductive charging functionality. The new iPhone features a display similar in size to the display of the 5.5-inch iPhone 7 Plus, but with a body closer in size to the 4.7-inch iPhone 7.

Along with a nearly bezel-free display, the device includes a glass body and is promised to be the most advanced, most revamped iPhone we've seen since the introduction of the iPhone 6 Plus in 2014. We expect the OLED iPhone, which is rumored to be more expensive than traditional iPhones, to be sold alongside two 4.7 and 5.5-inch LCD models that more closely resemble existing devices.

A dummy model featuring the upcoming OLED iPhone
The upcoming 4.7 and 5.5-inch iPhones have not been heavily featured in rumors, but they too are said to feature glass bodies, support for wireless charging functionality, and improvements to the processor, camera, and other components.

At the event, we may hear more about upcoming products like the iMac Pro and the HomePod, and there could be one other major hardware surprise in store for us - a new 4K Apple TV. Hints of such a device have been spotted in firmware leaks and we've known Apple has had a new Apple TV in the works for some time.

As for other hardware, many iPads and Macs were refreshed in June, so we are not expecting any updates to the Mac and iPad lineups, but expect to see new Apple Watch bands and new iPhone cases.

We've already been testing next-generation operating systems including iOS 11, macOS High Sierra, tvOS 11, and watchOS 4, but following Apple's event, we may see some of these updates released to the public. iOS and watchOS updates are often released just ahead of new iPhones, while macOS updates tend to come somewhat later. tvOS 11 is such a minor update that it isn't clear when it'll be released, but it could come alongside the other updates. One thing we may not see -- an Amazon Prime Video app. There's one in the works, but word is it won't be ready in time.

In line with past events, Apple's 2017 iPhone unveiling will kick off at 10:00 a.m. Pacific Time. Apple will stream the event live on its website and on the Apple TV, but for those who are unable to watch, MacRumors will be providing full event coverage, both on MacRumors.com and through our MacRumorsLive Twitter account.

Dekema2
So if you look at the grey area in the Apple logo, you notice it forms a notch with the blue part. This confirms that there will be that ugly bar at the top of the screen.

joshwenke
Time for everyone to start deciphering what the invite logo means...
Score: 63 Votes (Like | Disagree)

Vanilla35
Apple trying to set us up for a one night stand?
Score: 54 Votes (Like | Disagree)

Superhappytree
I know Apple doesn't usually do nostalgic things such as this, but when they announce the iPhone 8 come September 12th, it would be cool if they showed a flashback to when Steve announced the first iPhone.
The whole: "An iPod... a phone... these are not three separate devices, this is one device, and we are calling it... iPhone. Today, Apple reinvents the phone." Maybe with a black and white filter, with the crazy ones ad playing in the background in its entirety (the version with Steve's voice over). Then have a montage showing how iPhone has changed over the years, and how it’s affected peoples lives. Cue a slow zoom out showing all of this playing as a video on a phone screen... an OLED phone screen that is. Zoom out further, with the camera slowly panning around this glistening black glass enclosure along with the Apple logo. So basically, make it look like it was playing as a montage on the new phones display, while showing the phone off bit by bit, then ending with a hand gripped around it just like with the original iPhone. And closing it with the crazy ones ad still playing in the background:

"... because the people who are crazy enough to change the world, are the ones who do." *crowd goes nuts*

Maybe that's too cheesy for some, but it gives me goosebumps just thinking about it, and has that warm, classic Apple vibe to it.

Sunny1990
Bring it on very excited, The event will be held at Steve Jobs theater. Steve would be very proud.