Apple this weekend participated in a few LGBTQ pride parades happening around the world, including those in San Francisco, New York City, and Toronto.

Apple CEO Tim Cook tweeted his support for the parades, wishing a happy pride, "to all our employees, their families and customers around the world!" 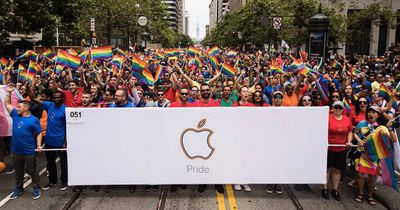 Happy #Pride2017 to all our employees, their families and customers around the world! Today we're showing #applepride in SF, NYC and Toronto pic.twitter.com/ngM48Fy0Ws — Tim Cook (@tim_cook) June 25, 2017

The company handed out t-shirts with a rainbow Apple logo to those marching in the parades, and in San Francisco there was a large #applepride structure where visitors were able to write their own messages regarding the celebrations.

In previous years Apple has taken to the streets for the pride parade in San Francisco with similar pride t-shirts for employees, commemorative videos posted on YouTube, iTunes gift cards, and a custom rainbow Apple Watch Woven Nylon band. The Pride Edition Woven Nylon band launched to the public during WWDC earlier this month, and Apple this week confirmed a portion of its proceeds are going to help LGBTQ organizations like The Trevor Project and the HRC.

Apple has long voiced support for LGBTQ causes like same sex marriage, as well as having spoken out against some controversial laws that predominantly risked negatively affecting the lives of gay, lesbian, and transgender individuals. Before he publicly came out as gay in late 2014, Apple CEO Tim Cook fought for equality in speeches and op-eds. Under late CEO Steve Jobs, Apple also opposed many discriminatory laws, including 2008's Proposition 8 that sought to eliminate the right to same sex marriage in California.

Now gays can use Apple products without shame. Actually with pride now!

Being gay is fashion now. I wonder how different their lives are now that they can advertise their sexual preference to the world.

We are more like straight people now. They've been advertising their sexual preference all along.
Score: 25 Votes (Like | Disagree)

cwosigns
I will be happy when posts like this don't automatically get put in the PRSI forum.
Score: 19 Votes (Like | Disagree)

I read what you said. All of it actually. Saying "be thankful you don't need them" is totally missing the point of them. Celebrating one's culture is always a good thing. It's always great to be proud of your own culture or sexuality or similar. Everyone needs to be proud of who they are. So we could say everyone needs them equally.

There is never a time when this is not needed.

Do you know why I marched this year? Because I can be fired for being gay. I can't adopt in all 50 states because I'm gay. I can be denied housing because I'm gay. I could be beaten and left for dead because I'm gay. I have to think twice before expressing any affection toward my partner in public. I used to have to switch pronouns at work when talking about my weekend. I faced losing the love and support of my entire family because of who I am. When any of these things become ever-present concerns for straight people BECAUSE of the fact that they're straight, I will march in the street with you. But until then, you don't get to question the legitimacy of why we march.
Score: 12 Votes (Like | Disagree)

Is it weird to have pride in what you are, rather than what you have achieved?

I could see Apple acknowledging Black History Month just as they acknowledge Gay Pride. There isn't a need for white pride, because straight white people are literally celebrated everywhere you look. Straight people have pride in who they are, but it's instilled before they're even conscious of it because it's reflected back at them from every direction. Minorities often have to consciously develop pride in themselves, and we gather together to celebrate each other and help to instill pride in one another because we do not see ourselves reflected in the dominant majority culture.
Score: 10 Votes (Like | Disagree)

slowpoke
Oh boy this is gonna be an awesome thread!!! I bet nobody is gonna post any incredibly goddamn depressing computerman homophobia!!!!!!!
Score: 10 Votes (Like | Disagree)
Read All Comments