Apple and Other Companies Push Forward in Fight for Marriage Equality

A total of 379 companies, including Apple, Facebook, Microsoft, and Google, have joined together to urge the Supreme Court to rule in favor of blanketed nationwide support for marriage equality (via The Verge).

The companies filed an amicus brief yesterday, represented by law firm Morgan Lewis, in the on-going Obergefell v. Hodges case, wherein two men are arguing that the state of Ohio discriminates against legal out-of-state same-sex marriages. Apple, along with the 378 other companies, angled towards a business-focused case for supporting every couple's right to marry. 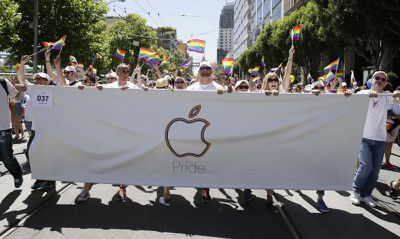 Apple at the 44th Annual Pride Parade in San Francisco
The brief claims that due to "a fractured legal landscape with no uniform rule on same-sex marriage", both employees and employers face increasingly burden-filled relationships, making it difficult to conduct proper business practices. The coterie of companies isn't represented by just well-known tech companies, but small family-owned businesses and other big non-tech brands like Nike, Coca-Cola, and United Airlines, as well.


“The competition for top talent crosses state and even national borders. State laws that prohibit same-sex marriage make it harder for businesses to recruit and retain talented employees,” says Morgan Lewis Partner Susan Baker Manning, counsel of record on the brief. “The patchwork of inconsistent state marriage laws makes it challenging and more costly for employers to administer benefits systems when some employees are unable to marry, and other employees’ marriages are not recognized by the state. This burdens businesses by costing them both time and money.”

Obergefell v. Hodges will enter the Supreme Court in April, and is one of a few others it will hear regarding the marriage equality issue. The main issue expected to be covered is whether the Constitution protects all same-sex couples in their right to marry regardless of their state, or if individual states will retain the right to prohibit gay marriage.

Apple has, unsurprisingly, voiced support for same-sex marriage in the past and marched in pride parades in San Francisco, with CEO Tim Cook coming out as gay in a letter written to Bloomberg Businessweek just last October. Most recently, last December the company voiced support in naming a proposed bill in Alabama after the Apple CEO that would focus on anti-discrimination in regards to sexual orientation in the work place. Currently, there are 36 states, and Washington, D.C., that support gay marriage.

jonblatho
Good on Apple for being on the right side of history.

I can't wait for the days when a thread like this won't have to be in PRSI.
Score: 48 Votes (Like | Disagree)

Says the guy with the offensive signature. You'd never say that about Islam, would you?

What's so offensive about my signature?

My signature is making fun of birthers and the morons who scream about President Obama being a socialist. And it's quite complimentary towards Jesus. I fail to see how it's offensive.
Score: 22 Votes (Like | Disagree)

Good on Apple for being on the right side of history.

I can't wait for the days when a thread like this won't have to be in PRSI.

Good on Apple for being on the right side of history.

I can't wait for the days when a thread like this won't have to be in PRSI.

yg17
Time to go get the popcorn, pro marriage equality threads on the front page always seem to attract the nuts.

I guess with Apple, Microsoft and Google all supporting marriage equality, the bigots who refuse to support companies who support equality will have to get rid of their phones and computers. Their stone age technology will go great with their stone age beliefs.
Score: 18 Votes (Like | Disagree)

Technarchy
Now they need to start marching for 2GB of RAM in the iPhone.

Lord knows progress is needed there.
Score: 10 Votes (Like | Disagree)
Read All Comments